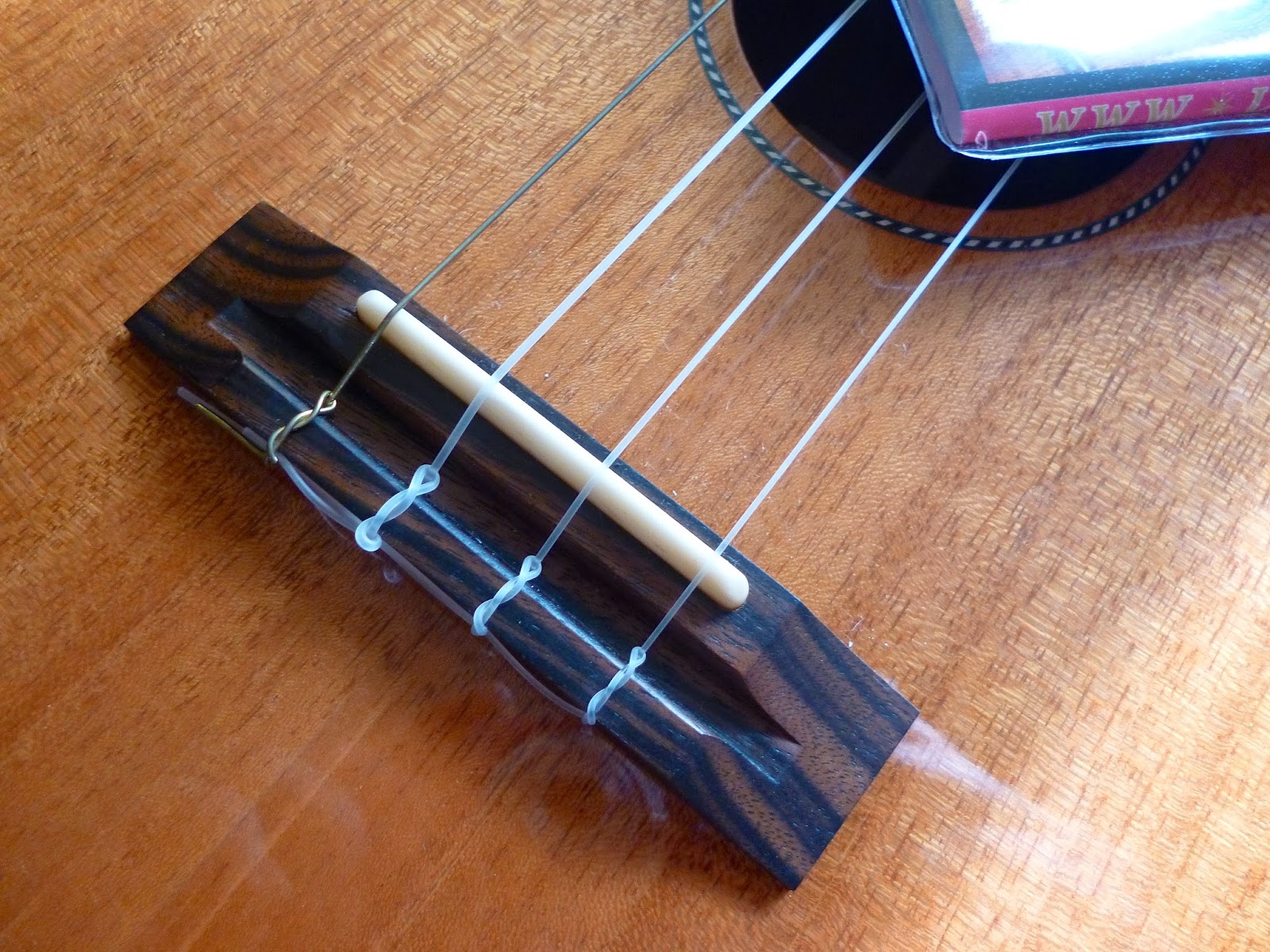 The ukulele might be the official instrument for YouTube cover artists and Zooey Deschanel wannabes, but I’ll tell you something else it’s good for: Aging writers who have always loved music but have never had enough patience to develop any actual musical skill.

If you know me, you know I was a recording artist in a former life — I ran a label and released albums of my own, as well as a couple of records for other artists. And it’s true that I co-wrote a fair number of songs, but they were all composed the same way: first in my head, then with me singing lyrics and a melody to someone with enough instrumental chops to make it real. It’s a rewarding method, in its own way — if nothing else, it teaches you to appreciate how much something can change during the journey from your head to someone else’s fingers while still feeling demonstrably your own. The songs always felt fresh the first time I heard them, and it was always exciting to record them, but in a large and fairly painful sense, I always felt like a bystander in my own music.

I walked away from it in late 2000, after a horrible gig that came at just the right time to underscore every bit of doubt I’d been feeling in the weeks and months prior. I hadn’t really been writing, and every time I started a song, it felt like I was just treading tired old ground — I still felt like there was something out there for me to say, but more and more, I understood that I didn’t have the vocabulary, and I wasn’t going to build it until I tore down everything else in my repertoire. I needed to learn the language I’d been relying on others to speak for me — to pick up an instrument and start over from the beginning.

Needless to say, it didn’t happen right away. Words are my medium, and never mind the music — as a lyricist, I felt like a dried-up hack by the time I walked away from the microphone. I wasn’t in any hurry to pick that up again, and I’m still not; I haven’t written a song in nearly 15 years, and I don’t see that changing anytime soon.

I bought my uke (a nice little tenor Ohana) after years of awkwardly fooling around with my daughter’s ukulele in stops and starts. Last fall, a uke-playing friend of ours spent the weekend with us, and by the time he left, he’d written a couple of songs with her. The sheer fun of the whole experience motivated me to take a more disciplined approach, and once I delved in, I was hooked; it’s hard to say no to an instrument with one-finger chords. My daughter, of course, didn’t take kindly to all my mucking around with her axe, so after a little hemming and hawing over the price, I decided to invest in one of my own.

Going in, the driving force behind my purchase was mainly the idea that it would add one more weapon to my Unstuck Arsenal. When I hit a rough patch with a piece I’m working on, I tend to cope by doing something else for a bit — sweeping, washing dishes, driving, that kind of thing. Preferably something physical but somewhat mindless, so I can stay occupied while opening up the creative part of my brain to whatever solutions it refuses to see while I’m sitting at the keyboard. Purging a block and getting a clean house out of the bargain is a pretty good deal, but if I can learn a few chords while I’m at it, so much the better, right?

So I’ve been banging on this thing a lot lately, not just learning the chords but practicing the changes, and it’s a joy. I mean, look — I’m 39 years old. I’m never going to be great with any musical instrument, and I may never even figure out how to play a song with this, let alone write one on my own. But it’s a terrific unstuck tool, and even more importantly, I’ve found it’s also a crucial component in my ongoing quest to reconnect myself to music in general.

As I’ve been walking around the house strumming, I’ve been thinking a lot about how tactile music used to be. From the upright piano in the parlor to the records and tapes I grew up with, music wasn’t just something you listened to, it was something you held and managed. It didn’t give you total control, though — that needle and those magnetic heads were powerful tools, but they were kind of blunt, and for some of us, there was a really intoxicating push and pull to the way you consumed music while it was consuming you. If you put on a record, you were basically in for the long haul; unless you were trying to avoid a really horrible song, it wasn’t worth skipping around with vinyl or cassettes, and because nobody owned 10,000 albums in those days, you eventually ended up absorbing even the least favorite songs in your library in a meaningful way.

Listening is a choice, and when recorded music was tied to physical objects, that choice required more of a conscious effort. It was a two-way transaction — the artist came to the table, the listener sat down and listened. It didn’t always work the way it was supposed to, but there was an elegance about it.

This isn’t really the lament it might sound like. I’m an avid streamer and I’m not giving up my Spotify subscription anytime soon. But on the other hand, I have noticed that I’ve started to, for lack of a better word, stratify my listening over the last six months or so — around the time I hooked up my new turntable for the first time. At first, I wasn’t sure what I’d really do in terms of building a vinyl collection; I hadn’t owned a record player in at least 20 years, and I’d long since lost my old LPs in one move or another. With very limited exceptions, anything I’d buy was something I either already owned on MP3 or could stream with the click of a mouse, so why bother?

Vinyl enthusiasts will tell you that the irreplaceable warmth of analog sound is the answer, to which I shrug in half-hearted agreement. There are things I really do love about the sound of a real record, like the way you can blast the ever-loving crap out of the volume without having to deal with that brittle high-end wash that rapidly encroaches the louder you get with MP3s (and a lot of CDs). It’s rounder and there’s more give. These old ears appreciate that.

But what I ultimately discovered is that, for me, playing albums is chiefly pleasurable because it’s a more active form of listening. You choose the record, you take it out, you put it on the turntable — and you don’t let your mind wander too far, either, because before long, you’re going to have to get up and flip it over.

It sounds like a small thing, and maybe it is. But I think there’s a crucial key in there that’s missing from our endless queues and vast cloud lockers. Streaming is wonderful for discovery, but I’m not sure any amount of button-pushing can compensate for the act of physically choosing a piece of music. It’s an object you’re holding, and what it contains is utterly finite — it isn’t going to keep burrowing into algorithms while you absent-mindedly surf the web. It’s here for about as long as you keep paying attention to it, really, and I feel like that means more.

Your mileage may vary. But for me, vinyl has been a solid bridge back to the type of active listening I did as a kid, back when I was dying to wrap my ears around every recorded chord in the known universe — not realizing that having the ability to swim in limitless music 24 hours a day would necessarily devalue the experience I cherished. It’s helped me slow down, to quit tugging at the chain. On some level, I think I viewed all those MP3s and “Suggested Just for You!” albums as a listening obligation, the same way I eyed my RSS or social media feeds. There’s so much out there! Don’t waste time. Consume.

But listening isn’t an obligation, it’s a privilege, albeit one we aren’t able to fully enjoy unless we really, truly embrace giving up on experiencing all of it. That’s what’s clicked for me, with what feels like thudding finality, as I’ve been strumming and hashing out chord changes over these last couple of weeks. Vast chunks of culture are now available on demand, making consumption easier than ever while rendering real absorption something of a dying art. We have more choices, and they’re easier to make — and unmake, as soon as some other film/album/ebook comes to mind.

I’m older, of course, and these feelings come as part of the general tearing away from pop culture that I’ve been experiencing for the last couple of years. A lot of what I’m saying here is basically an old dog talking about going back to his old tricks. But I also strongly believe that culture is increasingly viewed as a limitless commodity — and limitless commodities are disposable, no matter how high the demand. As our access expands, I think we need to narrow our focus at least enough to stop multi-tasking and consciously strive to maintain an active relationship with the stuff that goes into our eyes and ears. Less consuming, more choosing: to truly see, to honestly hear, to deeply feel. Those are the strings that bind us to the things that move us, and keep on pulling us back for more.