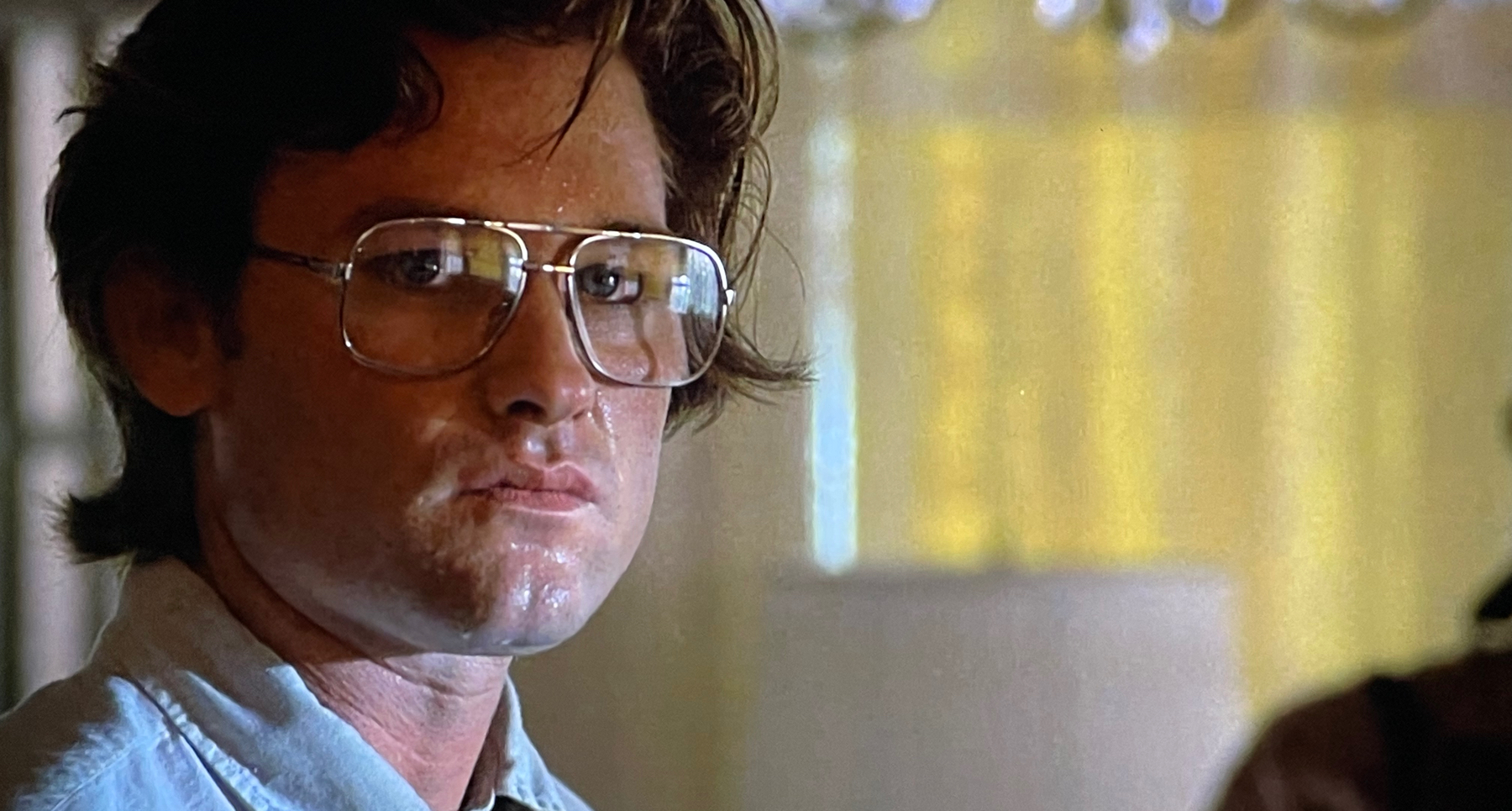 In theory, it should be difficult for a filmmaker to screw up a crime story set in Florida.

I mean, okay, it isn’t like the place isn’t lousy with beautiful beaches and beautiful people, and of course there are the parts of the state that are devoted to high fashion or high-waisted pants on the elderly. And there’s nothing particularly seedy about pastels or floral prints or eating dinner at 4:30 in the afternoon. But — and I argue this is a significant but — there’s also the goddamn weather, which produces the nifty combined effect of making people look as if they’re in the final throes of an exotic virus while lightning dances on the horizon and large reptiles gnaw on the cuffs of their pant legs. Atmosphere can be a major component of a really solid crime thriller, and it can go a long way toward helping the audience look past the flaws in a pretty lame one, too. Florida is positively dripping with the stuff.

It’s more than a little confusing, then, to watch 1985’s The Mean Season and witness the generally indifferent treatment that director Phillip Borsos opted to give the story’s Miami setting. Aside from a few stormy establishing shots, the overall sweatiness of the cast, and a climactic showdown that takes place in a storm, the movie presents the events it depicts as if they could have happened just about anywhere — all despite the fact that the title is a reference to a regional late-summer weather pattern that combines persistent thunderstorms and high temperatures. What you have here is a story about a serial killer on the loose, taunting a talented reporter on the verge of burnout while the city sweats. You should feel the heat, right?

Well. The Mean Season has some problems, and Borsos’ curious choices are among them, but this film’s flaws don’t all come down to direction. The story centers on Malcolm “Mal” Anderson, a veteran reporter for the Miami Journal who’s returning from vacation as the movie begins. He enters the office intending to tender his resignation so he can move to Colorado with his girlfriend Christine (Mariel Hemingway), but those plans go out the window when word arrives that a murder has taken place. Just like that, Mal’s back on the street, visiting the slain girl’s parents and trading barbs with the local cops. Clearly, this is a guy who has a hard time taking his teeth out of a story, no matter how loud his protestations to the contrary.

It’s a solid setup, and in the source material — In the Heat of the Summer, a novel written by real-life Miami Herald crime reporter John Katzenbach — it serves as the crux of the conflict between reporting the news and feeding off people’s pain. Katzenbach was motivated by a desire to explore that conflict, to interrogate the reporter’s personal responsibility in the often grim feedback loop between events and reporting on them, and although I haven’t read his book, I have to believe it grappled with that question much more intensely and honestly than the film it inspired. The Mean Season gives it some glancing blows, but ultimately, this is one of those movies that’s just smart and interesting enough to make you even angrier about the ways it fails to follow through.

To the extent that The Mean Season addresses its central theme, it does so through the relationship between Mal and Christine. As the film begins, she’s already nervous that he’ll back out of their plan to leave Miami, and her nerves skyrocket as soon as he’s drawn into the case. The conversations, then arguments, that they have about his commitment to the job do a decent job of telling you what you’re supposed to know about the contours of the story and Malcolm’s place in it — which is good, because the movie undermines itself persistently with its presentation of his character, and Russell was really the wrong guy for this role in 1985.

The Mean Season gives itself a relatively tricky job at the outset simply by using Mal as a protagonist. The central idea here is that every reporter has to be at least a little bit of a monster — or more specifically, I guess, a vampire, someone willing to feed off the pain of others to tell a great story. In order to do this idea justice, the character needs to be allowed to wander into darkness, and The Mean Season is never willing to send Mal there. He’s presented as a standup guy — one who understands the devil’s bargain he’s striking by covering this story, but still a person we’re supposed to root for, even after the killer singles Mal out as his conduit to the people and he becomes a story unto himself.

It’s certainly possible that the right actor could have given Mal enough layers to show the audience what the script was afraid to tell, but Russell wasn’t that guy. For starters, he was all of 34 the year The Mean Season was released, and far too young to be playing a grizzled reporter who’s ready to hang it all up and embrace small-town life. Instead, he comes across as petulant and vaguely dickish, a guy who’s unwilling or unable to appreciate his own success for reasons that are never sufficiently explained — and yet also a guy who can’t resist the buzz of celebrity when he becomes part of the news cycle too. The net effect is a central character who’s part void, and further diminished by a movie that really wants him to be a classic hero.

Russell’s done no favors by the casting of Hemingway as Christine. Unlike the character of Mal, it’s difficult to imagine any actor making a meal out of the scraps the script gives her — as per the general conventions of the time, her essential function is to be understanding and/or pouting and/or afraid, all while being pretty. It’s the type of role that’s important yet thankless; the film couldn’t really work without her, but it doesn’t treat her as an equal. All that being said, I’m reminded here of a review for one of Hemingway’s other films which described her as “radiant and wooden,” an assessment that’s brutal without being entirely inaccurate. The net effect here is that you never really care about Christine, so by extension, you never really care about her relationship with Mal — which becomes a very big problem as the story hurtles to a close and Mal’s personal life collides with his professional life, as the audience has long known it will.

These are all issues with The Mean Season, and they’re all real. But for much of the movie, they’re all mitigated to a certain extent; if it’s never quite the film it should have been or evidently wanted to be, it’s still an effectively paced, reasonably involving crime thriller that’s shored up by the work of a fairly solid cast. Even if he had no business playing Mal, Russell is a very talented actor, and despite the movie’s rickety approach to bringing him to life, he’s always very easy to watch. He was also blessed with a terrific opposite in the late Richard Jordan, who brings a savory edge to his portrayal of the film’s villain even when things start getting really ridiculous. And then there’s the supporting cast, which is absolutely packed with talent: Richard Masur plays Mal’s editor, Joe Pantoliano plays his photographer, and oh look, it’s baby Andy Garcia as a cop involved with the case!

Ultimately, even though The Mean Season lacks the courage of its convictions as a piece of commentary, it does well enough for itself as a crime thriller, at least until the wheels come off over the last 20 or so minutes. The film’s ending well and truly erases whatever goodwill it builds for itself in terms of its deeper themes, but if your expectations are sufficiently set, that probably won’t be enough to bother you. And as a Some Guy Cinema entry, it just about does the trick — even though Kurt Russell will always be a little too good-looking to fit snugly in the pantheon, he does a great job with characters who rush in to do dangerous things even though they always end up getting their asses kicked. It’s a sign of Russell’s acting ability that a guy who’s so naturally athletic is so good at shrouding it in a mousy aura; it’s the thing that pulls The Mean Season away from the action movie it might have been in other hands, keeping it grounded in (slightly) more emotionally impactful territory. I give it three out of five Scheiders.