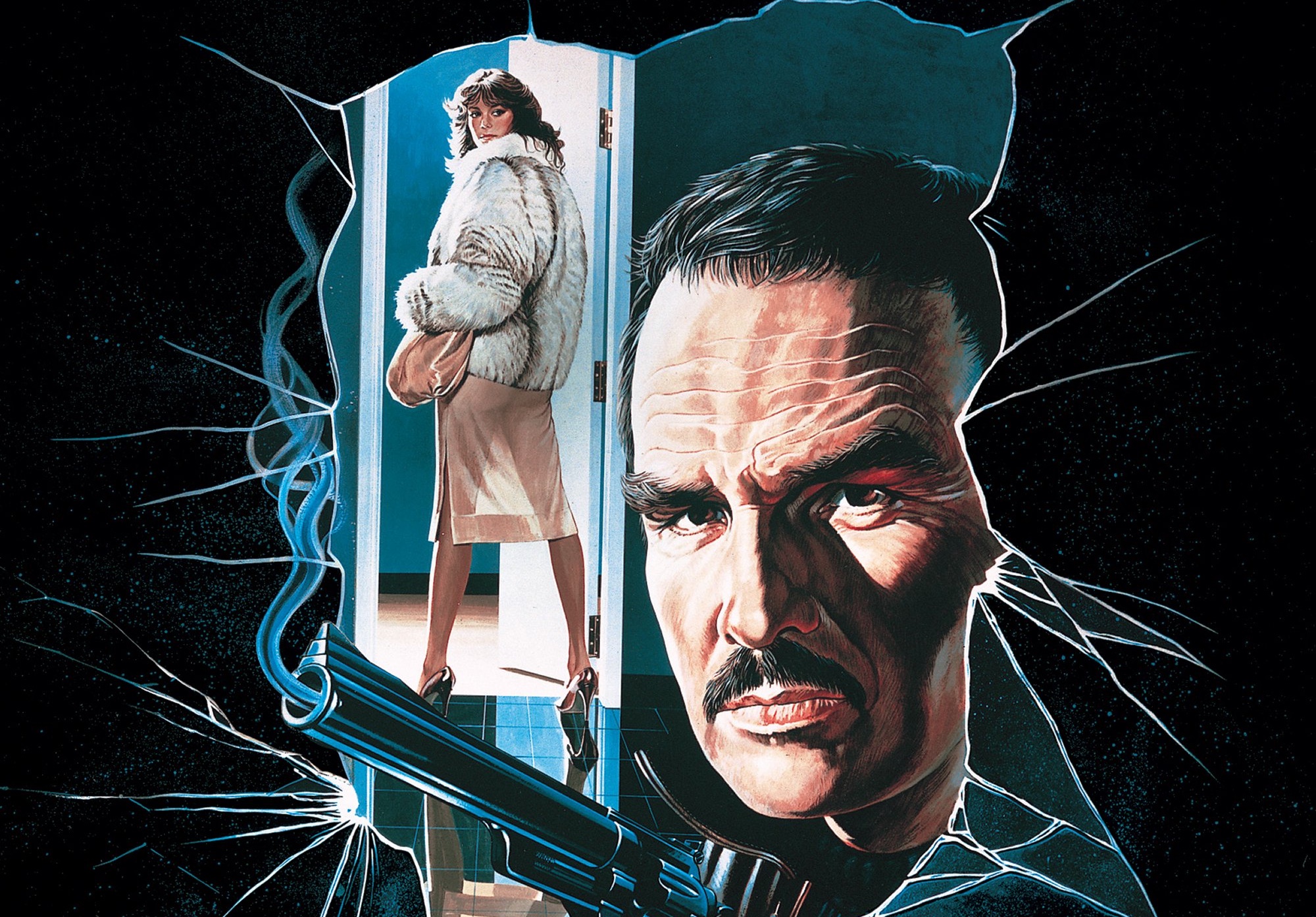 During my sophomore year of high school in 1989-’90, the district implemented a new policy they dubbed Sustained Silent Reading, or SSR for short. The idea was that kids weren’t reading enough, so they carved out 15 minutes a day for all of us to sit in class and leaf through a book, and like most changes of this nature, it wasn’t terribly popular even with kids like me, who’d been happily reading on their own for most of their lives. As a result, I ended up being one of the students who didn’t have a book to read when SSR got started, so I had to pick one from a basket in class.

The choices, as you might imagine, were slim — I don’t know exactly where these books came from, but I assume my teacher must have had them lying around at home. The one I picked up on a whim, William Diehl’s Chameleon, didn’t even have a front cover. I don’t remember why I grabbed that one, but I was hooked pretty instantly, and after I finished it, I spent the rest of the year tunneling through a series of other Diehl books: Following Chameleon, which was published in 1981, there was 1984’s Hooligans, 1987’s Thai Horse, and then 27, released in 1990.

As a novelist, Diehl trafficked in all the stuff that made paperback hits in the ’80s. His (typically globetrotting) plots tended to rest on shadowy and/or unlikely conspiracies; his characters faced death at every corner, often at the hands of exotic assassins with cool codenames; his sex scenes were plentiful, his dialogue pulpy. Oh, and his protagonists? They were pretty much all Some Guy. My favorite of the bunch, from my favorite Diehl novel, was Jake Kilmer, the mob-busting fed in Hooligans who, in pursuit of an underworld kingpin, is drawn back to the wealthy Georgia social circles he orbited in his youth — and the great unrequited love of his life. The hero in Thai Horse is a former political prisoner who’s lured into going back to ‘Nam to help an old friend. The main character in 1994’s Primal Fear, later turned into a movie starring Richard Gere and Edward Norton, is a lawyer who gets himself mixed up in the wrong murder case. You get the idea.

Anyway, before all that, there was Sharky’s Machine, the 1978 novel that started it all. Written when Diehl was struggling to make ends meet after walking away from a career in journalism, it became an unlikely hit which was then turned into a moderately successful film starring and directed by Burt Reynolds. Never much of a Reynolds fan, I neglected to see Sharky’s during my Diehl phase — I only made a half-hearted stab at reading the book, which struck me as too small and slow in comparison with the stories he wrote later. Having finally seen the film, I can see the outlines of what was to follow from Diehl, as well as what drew Reynolds to the story in the first place.

Sharky’s Machine lets you know what kind of movie it is right away, with an opening early-morning shot of Burt Reynolds walking around the ass end of the industrial part of town. He’s swinging a duffel bag. He looks unhappy. As the soundtrack immediately informs us, he plays the street life. Your expectations are set.

As the story opens, Sharky is an Atlanta police sergeant working in narcotics. That duffel bag he’s carrying is loaded with cash, and he’s walking around the seedy part of town because he’s about to make a deal and bust a perp — a deal that’s ruined when a fellow cop shows up at the wrong moment and sends the perp fleeing on foot. The set piece that follows briefly had me worried I was watching the wrong kind of movie — a car explodes like a goddamn bomb after being hit by a single bullet, and Sharky shoots the shit out of the drug dealer after getting a bus driver shot in the head through arguably criminal negligence — but it settles into its halting Some Guy rhythm pretty quickly after that. As punishment for his part in all the mayhem, Sharky is reassigned to the vice squad (a development explained by his soon-to-be-ex-partner Jojo, played by Joseph “Stefano DiMera on Days of Our Lives” Mascolo), and exiled to the basement of the police station, where he meets his new commanding officer, Lieutenant Friscoe.

A good Some Guy Cinema rule of thumb is that if you see Charles Durning behind a policeman’s desk, you’re probably in for some fun, and Sharky’s Machine more or less delivers most of the time. Durning tears into his role with gusto, playing the casually racist and possibly totally ineffective Friscoe at a volume and tempo that, in one particular scene, seems likely to have rendered him unable to speak for a day or two. As a director here, Reynolds was as shaky as he was Sharky, but he knew exactly who to look for in his cast. Aside from Durning, he anchored his ensemble around prolific character actors like Brian Keith and a veritable rogues’ gallery of Men You’ve Seen and/or Heard Before. Like the guy who voiced Piglet in the Disney Winnie the Pooh cartoons!

And Richard Libertini from Fletch!

Clearly, even if Sharky was technically demoted, the caliber of acting talent on the vice squad is far superior to the stuff narcotics had to offer. (No offense, Joseph Mascolo.) Which is a good thing, because the engine of the real plot gets revved up pretty quickly once Sharky’s down in the basement — after he collars a sex worker during a political rally for gubernatorial candidate Donald Hotchkins (Earl Holliman), the squad leafs through a black book left behind by her pimp (played in a genuinely unsettling cameo by William Diehl) and quickly discovers the existence of a high-class escort ring that includes the $1,000-a-night services of a mysterious woman known only as “Dominoe.”

There’s a lot of plot here, which is pretty typical for Diehl stories, and much of it is inessential, albeit a little smarter than necessary. (Example: the names of the girls are all seven letters, because they’re code for their telephone numbers — something Sharky deciphers in something like ten minutes.) The important thing is that the vice squad actually has itself a case for a change, and against Friscoe’s better judgment, they opt to pursue it on their own.

Meanwhile, members of that high-class escort ring are being murdered by a guy played by classic movie mobster Henry Silva, who I can only imagine delivered his performance between bouts of Burt Reynolds screaming “MORE!!!” at him between takes.

We’ve got ladies of the night in danger. We’ve got drugs on the street. This is all Sharky needs to round up a crew (sarcastically dubbed “Sharky’s Machine” by Friscoe) and start staking out Dominoe, who’s played by a genuinely luminous Rachel Ward. Naturally, Sharky starts falling in love with her from across the street during all those late, lonely nights spent watching her swan around her expensive high-rise apartment singing “My Funny Valentine” to herself. Naturally, she’s also mixed up with gubernatorial candidate Donald Hotchkins, who’s married with five kids at home.

Clearly, there are a lot of Some Guy Cinema ingredients at play here. You’ve got a hero no one likes, a group of some guys doing some stuff, the makings of a high-level conspiracy, and a sweaty assassin stalking expensive sex workers. Plus drugs!

As Sharky’s Machine hurtles along, there’s an increasingly fraught tension that develops between its need to keep moving and its needlessly complicated plot. Hotchkins, it turns out, is mixed up with some pretty bad people — people who do things like take young girls and groom them for a life of sexual servitude, not to mention flooding the streets with synthetic heroin. But a lot of things are left unaddressed or barely explained in the middle of all this — like why the movie’s Big Bad is sending his drug-addled brother around to murder his own workers. But as tends to be the case with this type of film, the details of the story aren’t as important as its velocity, and Sharky’s zips when it needs to. And Reynolds, although he makes a handful of unintentionally funny choices here (including the string-swelling moment when Sharky picks up Dominoe and carries her to bed), has the good sense to slow things down when he ought to — the fairly lengthy stakeout sequence does a genuinely nice job of capturing the mind-numbing doldrums of that type of work, even if it goes comically out of its way to present Sharky as a smoldering yet sensitive loner. (Also, there’s so much cigarette smoke in this movie. Very 1981.)

It probably goes without saying that certain elements of this movie haven’t aged well. There’s the aforementioned casual racism, for starters, as well as the whiff of misogyny around the way the female characters are treated. (Does Sharky end up consummating his ardor for Dominoe after slapping and demeaning her? Reader, you know it.) On the other hand, this is all rather appropriate for the era and the characters. Like the Doc Severinsen score and the Jazzercise class Dominoe attends, it’s all part of the time capsule.

More problematic, at least for our purposes here, is whether Burt Reynolds was qualified to play a Some Guy Cinema protagonist at this stage of his career. Not only was he still very much a sex symbol, he was also known for playing rugged, unflappable characters like the Bandit in Smokey and the Bandit. His portrayal of Sharky is perpetually at risk of teetering onto the wrong side of the line between “determined to do the right thing” and “macho asshole,” and the script never really fleshes out his character enough to give the audience a solid feel for which of those things is more true. When it tries to, it… well, it fails:

Ultimately, however, I think Sharky’s Machine comes down just enough on the right side of the Some Guy Cinema line. Burt Reynolds was a matinee idol, but he spends a lot of this movie looking sweaty and puffy, and if he wasn’t already wearing a hairpiece at this point, I hope he sued his barber. And although Sharky has a number of Stallone-worthy tough guy moments, he’s also far from a superhero — he gets his ass kicked by ninjas at one point, and during the movie’s most squeamish sequence, he’s subjected to some hair-raising torture techniques that reduce him to tears. Prior to that, however, he also gets off a classic Some Guy quip after watching an assailant whip out a butterfly knife:

Sharky’s Machine receives additional demerits for a final shot that crossfades between a body plummeting from a skyscraper and Burt Reynolds pushing Rachel Ward on a tire swing, but all in all, it’s still roughly two-thirds of a decent Some Guy Cinema entry. I give it three out of five Scheiders.