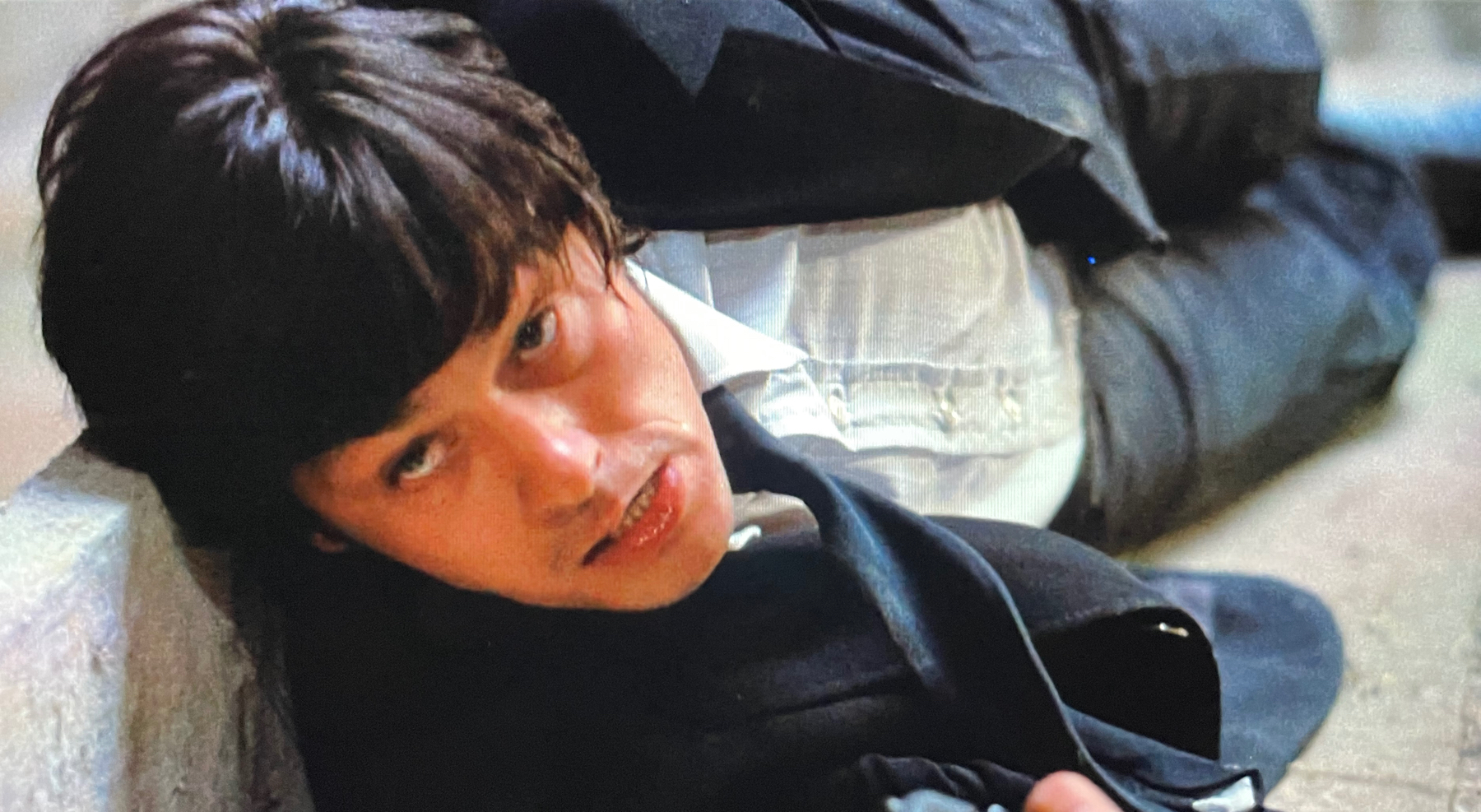 There’s no real rhyme or reason to the way I choose movies to cover for this series, and there are only seven different types of stories, so it’s probably only natural that on occasion, Some Guy Cinema will feature back-to-back posts about remarkably similar films. Still, it feels a little weird to be writing about 1973’s Scorpio — starring Burt Lancaster as a guy trying to extricate himself from the spy game — so soon after Hopscotch, starring Walter Matthau as a guy determined to leave the CIA behind. Of course, stories that seem similar in terms of outline can be very different in the telling, and that’s definitely the case here; where Hopscotch played it for laughs, Scorpio wants to be deadly serious.

Lancaster, who turned 60 the year the movie was released, stars as Cross, a veteran CIA agent who’s first seen dispensing bits of sage advice to Jean Laurier, a.k.a. Scorpio, a hitman for hire who’s become something of a protege to Cross. Although Cross intends to retire, with Laurier stepping in to replace him after he’s gone, their relationship is put to the test when the agency marks Cross for death — and decides Laurier is the man to finish the job.

Cross, wily old goat that he is, senses something is off right away and immediately goes underground, telling his wife Sarah (Joanne Linville) that he’ll get her to safety as soon as possible. This sets up an extended sequence in which Cross uses his wits — and his extensive network of contacts — to evade his pursuers and get out of the country, offering a fascinating example of how the action movies of the era moved at a generally logy pace in comparison with their successors. It also makes a point of putting the buttoned-up Lancaster in some ridiculous situations, such as the scene in which a seemingly ordinary washroom attendant utters the funniest line in the movie:

The scheme Cross puts together in order to get out of the U.S. undetected involves blending in with a huge group of preachers who’ve just gotten out of a conference. Since he knows the agency will be watching flights to Europe, he leaves on a flight with several of the preachers and books an itinerary with several stops in order to make himself harder to track. He also disguises himself in preacher’s garb, which — oh, did I mention that all of these preachers are Black? Here’s Burt Lancaster, paving the way for C. Thomas Howell in Soul Man:

Clearly uncatchable, Cross lands in Europe, where he meets up with his old Ukranian counterpart Zharkov (Paul Scofield), who’s able to arrange for a limited amount of safe harbor because his agency sees Cross as a potential asset. It’s here that Scorpio gives off a few glimmers of what makes it more interesting than your typical middling spy thriller — Cross and Zharkov know where a lot of bodies are buried, and they’ve been at the game long enough to have their youthful idealism and dreams of fighting for God and country beaten out of them by too many shady (and lethal) deals put together for short-term gain. They understand that the old spooks of their generation are being phased out, and they see the way the global intelligence apparatus is being propped up for its own sake rather than anything to do with national security or the greater good. Hackneyed as they are, the conversations between Cross and Zharkov give Scorpio what passes for its soul.

The whole European chapter of the movie is really Scorpio‘s best. Scrambling to stay a step ahead of his former bosses, Cross reaches out to his old friend Zemetkin (Vladek Sheybal), who agrees to help him despite the high risk of pain or death. In a scene that’s unfortunately a little hammier than it ought to be, we learn that Zemetkin is devoted to Cross because he was part of the battalion that freed him from a Nazi death camp during World War II — a plot device that works a little too hard to make Cross a white hat, but also underscores the motivations he initially had for entering government service while further highlighting the creeping cynicism that was already starting to color this type of film in the early ’70s. Spies weren’t dashing good guys anymore — they were double-bladed weapons being tossed around by the political current, slicing it up wherever they went.

Unfortunately, Scorpio isn’t really about all this. It’s the title character’s pursuit of Cross that’s the real story here, and although the film does contain a couple of cool set pieces (including what appears to be some admirably committed stunt work from Lancaster, who, I repeat, turned 60 the year the movie came out), the action is the least interesting part. The plot’s also needlessly complicated — the CIA blackmails Laurier into killing Cross by framing him for narcotics possession, which establishes some nicely antagonistic repartee between Laurier and his handlers but also muddies things as far as his motivation is concerned. The overall idea is that Laurier is willing to take the job not only because he’s under the agency’s thumb, but because they’re willing to meet his conditions — therefore reaffirming that in this business, loyalty can always be purchased for a price. But the net effect onscreen is basically just Delon acting like he hates everyone all the time, which isn’t all that interesting.

Cross is eventually motivated to return to the United States after a botched CIA operation results in the death of his wife, at which point he — as Laurier has promised will happen — starts exacting revenge. It’s here that the big confrontation promised by the poster starts clicking into place, and also where Scorpio starts puttering to a halt. While it’s gearing up, the movie makes a point of presenting Cross as a wronged man, and as it goes along, it makes another point of calling everyone’s true loyalties into question; it’s all pretty much par for the course for this kind of thing, but it’s also a well that can get poisoned pretty quickly if you return to it too often. There aren’t many satisfying ways to wrap up a mystery that’s predicated on the idea that maybe everyone you’re watching is a crook and an asshole, and unfortunately, Scorpio couldn’t come up with one.

Lancaster was dismissive of Scorpio after it was released, shrugging it off as the type of meaningless action movie actors sometimes make in order to pay the bills and remain commercially relevant, which is true enough. It’s also true, though, that this film is flecked with bits of more interesting stuff, and while it’s never exactly riveting, it does have some worthwhile things to say about the morality of state-sanctioned violence and the poisoning effect of the military-industrial complex. The timing of its release is interesting as well — coming along before stuff like Three Days of the Condor and The Parallax View, it reflects a growing unease with post-WWII geopolitics that presaged the truly cynical stories that spilled out of Watergate.

In terms of Some Guy Cinema, Lancaster is a bit of an awkward fit. Like Robert Shaw in Black Sunday, he’s playing a character whose bruised ideals help to leaven his broad-shouldered screen persona, so although he’s still Burt freaking Lancaster, it does knock him down a few pegs — an effect amplified by the fact that he’s an older man playing a character who’s forced to fall back on tools that would have been a lot sharper a few decades before. Lancaster isn’t the problem with Scorpio, and despite his petulant performance, neither is Delon — both men would have been able to comfortably shoulder a version of the movie that gave its central conflicts more depth, but it unfortunately doesn’t exist. A great example of a movie whose most entertaining and/or thought-provoking components lurk at the margins of the screen, Scorpio is fine for wasting a couple of hours, especially if you’ve ever wanted to see Burt Lancaster in blackface. I give it three out of five Scheiders.