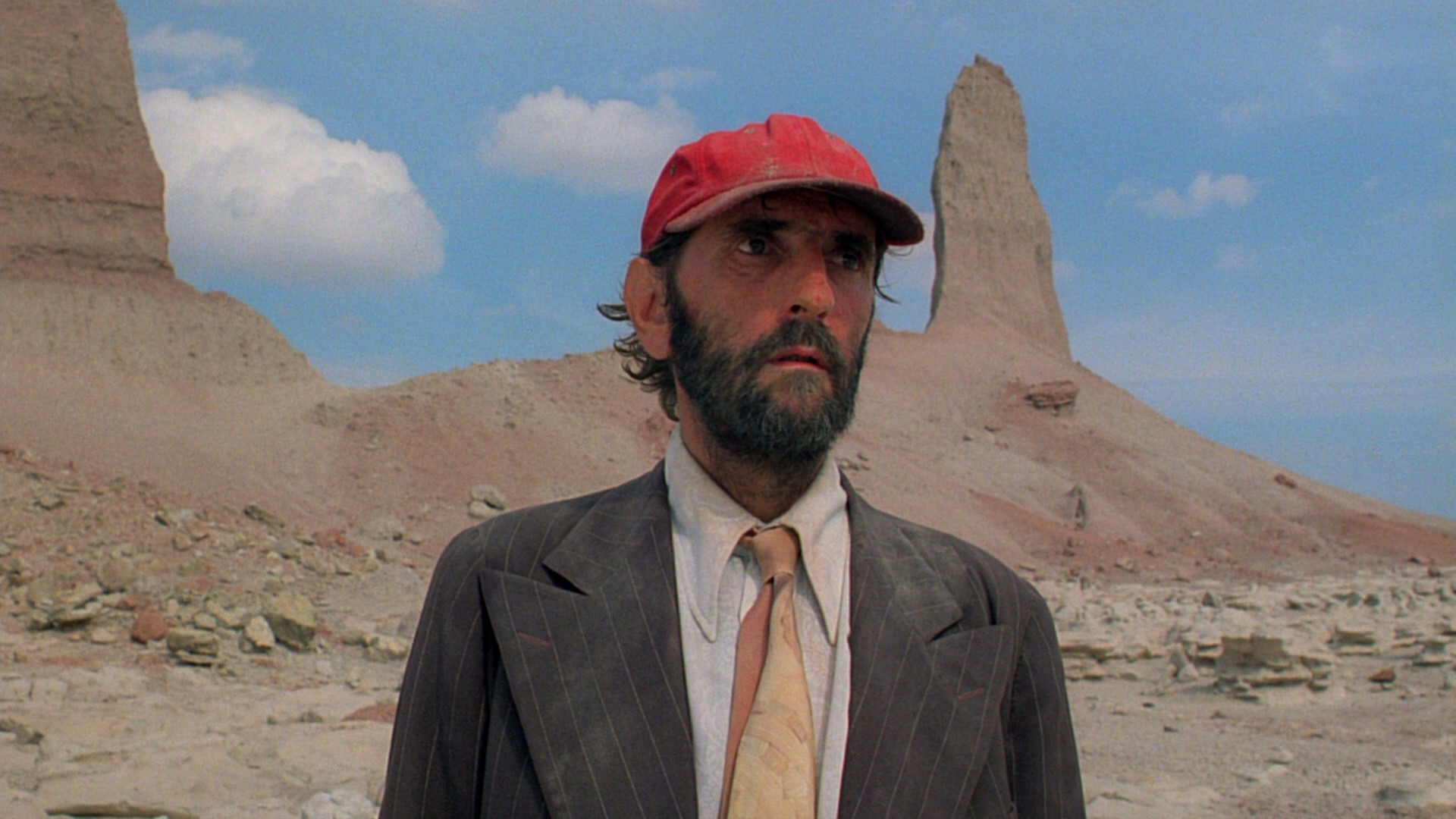 This is a special film.

I don’t necessarily mean “special” in the sense that it’s superior to other, lesser films — although it’s that too, and the reasons why have been outlined by countless writers, many of whom are smarter and more perceptive than me. For the moment, I’m speaking mainly in the context of this series: More than most other films we’ve covered here, Paris, Texas is well and truly a movie about some guy doing some stuff. (He’s doing a lot of that stuff while trying to remember and/or forget some other stuff he did, but we’ll get to that in a bit.)

Released to U.S. theaters in the fall of 1984, Paris, Texas represents a sort of Dvořák moment for director Wim Wenders, who’d spent the previous few years in America after exhibiting a fascination for the country in his earlier work. It’s a very “American” film, in that the landscape is often as much of a character as any of the human beings onscreen, but it’s also demonstrably the work of a filmmaker with an outsider’s ardor for the places he’s depicting. His shots of the desert might as well be on Mars; the segments that take place in Los Angeles are loaded with lovely hill shots; the film’s last half alternates between striking big-city skylines and dusty small-town streets. Visually, it’s nothing if not rich, but it’s rich to the point of parody — stunning snapshots of a country that never actually existed.

Then again, artifice is one of the threads running through Paris, Texas. On one level, it’s the story of a shattered family at a painful crossroads, but underneath all that, it’s also about the lies we tell ourselves, and the sickness that can take root when we start to believe them. When we first meet Travis Henderson (Harry Dean Stanton, marvelous as always), he’s a baleful shell of a man, staggering through the desert and futilely trying to get water from a dry spigot before wandering into a shabby little store where he helps himself to a fistful of ice from a cooler next to a sign upon which is scrawled:

“The dust has come to stay. You may stay or pass on through or whatever.”

Paris, Texas is not shy about its symbolism. For one thing, entire essays have been written about the way Wenders and his brilliant cinematographer Robby Müller used color in this film — it would be heavy-handed to the point of distraction if it weren’t so visually compelling — but any number of the movie’s painterly shots work on more than one level. For example, after Travis munches on some ice and collapses on the floor of the store, he’s taken to the offices of a seedy local doctor, who phones Travis’ brother Walt (Dean Stockwell, also excellent). When we first see Walt, he’s on the phone with the doctor, talking in front of what appears to be a brilliant blue sky — but when the call ends and the camera pans out, we see it was really just a billboard panel. The meaning here, should you choose to interpret it this way, is that even though Travis is obviously suffering through a particularly undignified phase, his brother’s life is flawed too — perhaps even somewhat artificial.

This point is underscored after Walt manages to get Travis from Texas to Los Angeles — a journey in and of itself, one which involves bribing the doctor and weathering a longer-than-planned road trip with a man who doesn’t utter a word throughout the first half hour of the film. Waiting for them is Walt’s wife (Aurore Clément) and Travis’ seven-year-old son Hunter (played by a remarkable Hunter Carson), who they took in when he was deposited on their doorstep after Travis disappeared four years earlier. Although Walt and Anne are of course happy to know Travis is alive, the silver lining of his sudden reappearance comes with a dark cloud — they’ve come to think of Hunter as their own, and it’s impossible to know what the inscrutable Travis intends to do now that he’s back.

The tension here exists largely because of Stanton, who was sublime when it came to acting without words. Travis goes on a largely silent journey through much of the first half of Paris, Texas, and Stanton plays him as a man who’s coming back to himself — from the furtive restlessness of the person we meet in the desert to the shyly playful one we see coming up with a Chaplinesque routine on the fly to get a smile out of his understandably distant son. Yet as much as Travis may seem to blossom in Walt and Anne’s home, and as much as he may bond with Hunter, Stanton never lets you forget that he’s being shadowed by something terrible enough to drive him into the wilderness for half of his child’s life.

That’s about as much as I want to get into the plot of Paris, Texas, although anyone who’s consumed enough stories to understand the concept of Chekhov’s gun will instinctively know that there are certain things that have to happen here. Wenders leads with a willfully off-kilter rhythm, and the dreamlike effect is enhanced by Müller’s cinematography and Ry Cooder’s score, but at its heart, this story — written by the great Sam Shepard with L.M. Kit Carson, whose son played Hunter — is fairly simple, even if a number of the details are unusual or outlandish. We know Travis is on a journey of self-discovery and/or reclamation, and we know we’re meant to understand what drove him away from his wife and child, just as we know we’ll learn the wheres and whys of what happened to Hunter’s mom (played by a suitably luminous Nastassja Kinski).

The point isn’t really the framework, it’s how it’s filled in, and that’s where Paris, Texas excels for most of its nearly two-and-a-half-hour runtime. The languid way the story unspools requires a certain amount of patience, of course, but it also generates its own sort of queasy tension if you can dial into the movie’s wavelength. There are no bad guys here, just people trying to do the right thing, and the longer you watch it, the more you understand something’s going to have to give, and someone is going to get hurt. Shepard was occasionally accused of falling back on certain pretensions in his work, and if Travis had been played by a different actor, I think it would have been easy to dismiss Paris, Texas as a lot of empty denim strutting around about What It Means to Be a Man. In a way, the whole thing is a plea for better communication between men and women, but without Stanton using his haunted eyes to convey the broken parts of his character in a way the script couldn’t or didn’t, it would easily have been drowned out.

Unfortunately, no movie can meander forever, and the major flaw in Paris, Texas is that it gets confused about what it’s building toward. I’m not really sure what Carson and Shepard thought they were saying during the last 20-30 minutes of this movie, but the net effect is fumbling — although this section of the film contains some of its best acting, and some haunting imagery, it takes place in a thicket of narrative weeds, alternating between thudding (albeit gorgeously filmed) symbolism and macho posing. Still, it never quite loses its soul — again, largely thanks to Stanton, who makes you believe — or at least understand — everything his character believes. Perhaps it’s fitting that the movie exits with the same erratic gait that its protagonist walks in with. Either way, this is a viewing experience that will stick with you, and Harry Dean Stanton was one hell of a Some Guy. Four out of five Scheiders.