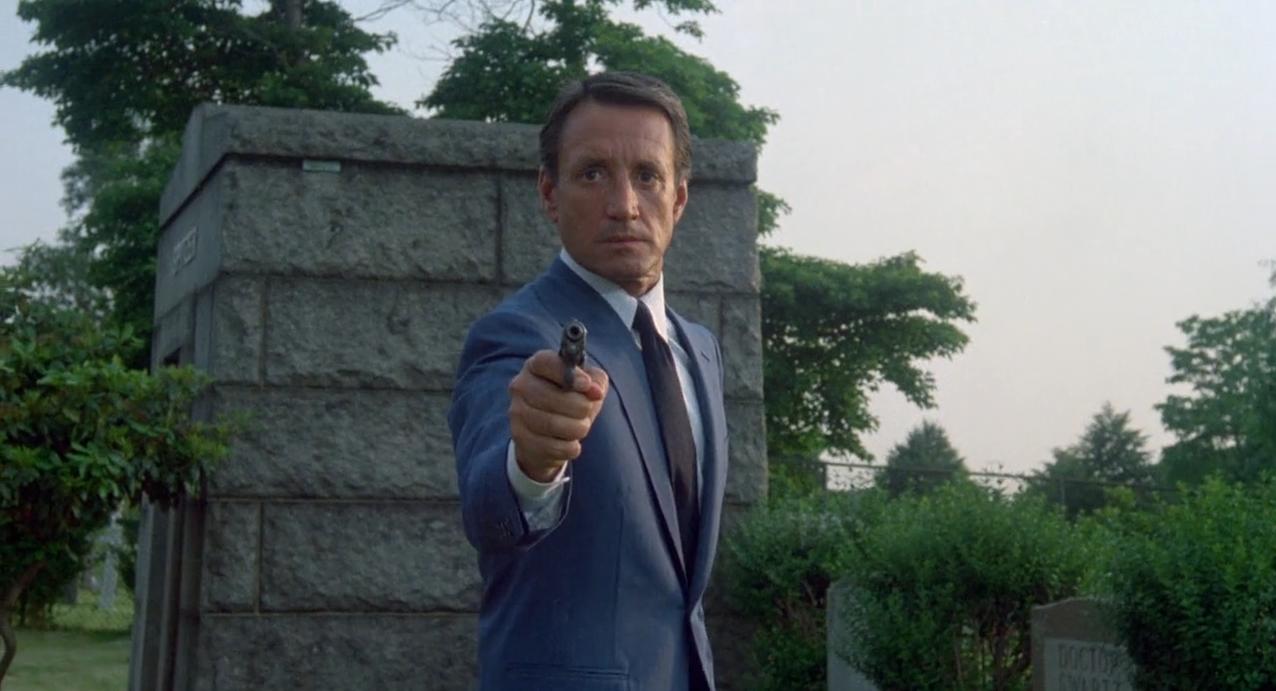 Have you ever wanted to watch a film starring Roy Scheider as a spy who loses his wife in a shootout, then becomes embroiled in a serial murder plot involving an ancient Jewish brothel? Well, friend, have I got the movie for you.

In the opening moments of 1979’s Last Embrace, we see Harry Hannan (Scheider) canoodling with his wife Dorothy (Oscar-nominated documentarian Sandy McLeod) at a lovely cantina. The atmosphere is romantic! There’s music in the air! And then, oh no, there are gunmen fucking up their date, shooting bullets everywhere and murdering poor, innocent Dorothy before Harry can put a stop to it. One slow-motion fadeout later, we see Harry staring pensively out the window of the clinic where he’s been recuperating since those gangsters offed his wife.

That’s a lot to take in before the plot really gets moving, but Last Embrace isn’t the type of movie that wastes much time (aside from the audience’s, wakka wakka). In no time at all, we see Harry being cleared to return to active duty even though he’s clearly still too emotionally damaged to be back in the field. This is reinforced at a train station in Connecticut, where Harry is convinced someone tried to push him onto the track — but the poor commuter he confronts (a marvelously fro’d Mandy Patinkin) was nowhere near him on the platform, as pointed out by a fellow traveler (future ALF dad Max Wright).

And the shenanigans are nowhere near done for Harry — after disembarking from his train, he heads to a mall that’s supposed to be the drop for his next assignment, only it doesn’t happen, and when he arrives back at his apartment, he finds Ellie (Janet Margolin), a young graduate student who informs him she’s subleasing the place and was told the owners would be out “indefinitely.” Poor Harry’s paranoia is further inflamed when he meets with the head of his mysterious agency (Christopher Walken), who expresses borderline contempt for him — and then, when Harry visits his wife’s grave, he’s confronted by his brother-in-law Dave (Charles Napier), who oh by the way also works for said spy agency, and is happy to inform Harry that he’s been charged with keeping an eye on him to make sure he hasn’t totally cracked.

(Harry, for the record, screams and pulls a gun on Dave during their conversation, so he definitely seems at least semi-cracked.)

Okay, so you get the idea, right? Our hero has endured some trauma and he might be losing his grip — or he might be the target of a killer lurking in the shadows, an idea that is further reinforced when an ominous note written in Hebrew shows up at the apartment. Naturally, he takes it to a rabbi, who tells him it’s a death threat. Conveniently, Ellie happens to be dating Richard Peabody (John Glover), a professor whose area of focus is Hebrew studies, and John tells Harry that the note essentially translates to “Avenger of Blood.”

Whose blood? Who’s avenging whom? The note doesn’t say, but fortunately, the rabbi has reached out to Sam Urdell (Sam Levene), a member of a secret Jewish society that’s been tracking a series of deaths connected to these “Avenger of Blood” notes. Together, Harry and Sam manage to deduce that the whole thing traces back to a long-since-shuttered brothel run by the Zwi Migdal, a real-life organized crime group run by a group of Polish Jews that happened to include Harry’s grandfather. And so Harry’s off to try and figure out what the hell all this has to do with him — all while Dave, who has been ordered by Christopher Walken to kill Harry, is on his tail.

Have I made any of this sound the least bit exciting? If so, I apologize, because it isn’t. I try to avoid including many plot details in these posts, but with Last Embrace, it’s hard to avoid — you can’t really outline the story without getting into a lot of this, and getting into it also helps illustrate the peculiar way this film is packed with incident (and great actors!), but never does very much with any of it. Given all the talent assembled onscreen, and the fact that this was directed by the guy who was five years away from giving the world Stop Making Sense, you’d expect this movie to be a hidden gem; instead, it’s a sodden misfire.

Everything in Last Embrace is stilted, clumsy, off somehow. From the opening sequence, you get the feeling Demme was flailing for a way into this story — there isn’t the barest hint of the level of control, or the ability to generate tension, that he would go on to show with The Silence of the Lambs. Instead, he has Scheider ping-ponging all over the emotional map, and he doesn’t do anything at all to support his wild modulations. When Harry spins screaming toward the train tracks during the scene at the station, it’s filmed in such a way that you could almost mute the sound and think you were watching someone recreating Singin’ in the Rain. When Harry freaks out on Dave in the graveyard, it feels like he was handed the script for a different movie between takes. And no matter what’s going on, Miklós Rózsa’s intrusive score is jacked way up in the mix, working overtime to spark emotions by smothering them to death.

It definitely doesn’t help that this is a very solid example of a certain flavor of thriller — one that seems to have been put together under the assumption that all you need to generate a little excitement is to put some spies onscreen, wave a little smokescreen around whatever it is they’re supposed to be doing, and add some striking and/or exotic locations to the mix. This type of movie was exceedingly plentiful in the ’70s and ’80s, and very often it sucked, but rarely in the slow-motion-falling-down-the-stairs way Last Embrace does. This is the type of film that spoils its climax on the poster. (I’m not sharing it here, don’t worry.)

And stranded in the middle of it all is Roy Scheider, the actor who is the patron saint of Some Guy Cinema as well as its unit of grading measurement. It pains me to note this, because this is the first time we’ve covered an actual Scheider picture here, and although I don’t believe Last Embrace paints a flattering portrait of his estimable gifts as an actor, it does paint a bright, glowing arrow on the floor toward the long series of godawful action thrillers that would tragically end up rounding out his once-promising career. Scheider was very gifted at playing stand-up guys, and he could also play characters who were haunted by violence; he would do both in the superior Blue Thunder four years later. Here, he’s just…well, I mean, I guess he’s just Some Guy, albeit not one who’s particularly charismatic or intelligent or even technically good at his job.

There’s a lot I’m leaving out about Last Embrace, including the comically anticlimactic final act and the ludicrous way the plot hinges on one of Margolin’s exposed breasts. But the main takeaway is this: Do not watch Last Embrace. It isn’t uncommon for me to halfway recommend the movies covered here as painless afternoon time-wasters, but this one is too complicated to have playing in the background and too lifelessly dumb to watch with both eyes. One out of five Scheiders, goddammit — and it only gets that one because of the literal Scheider starring in the thing.