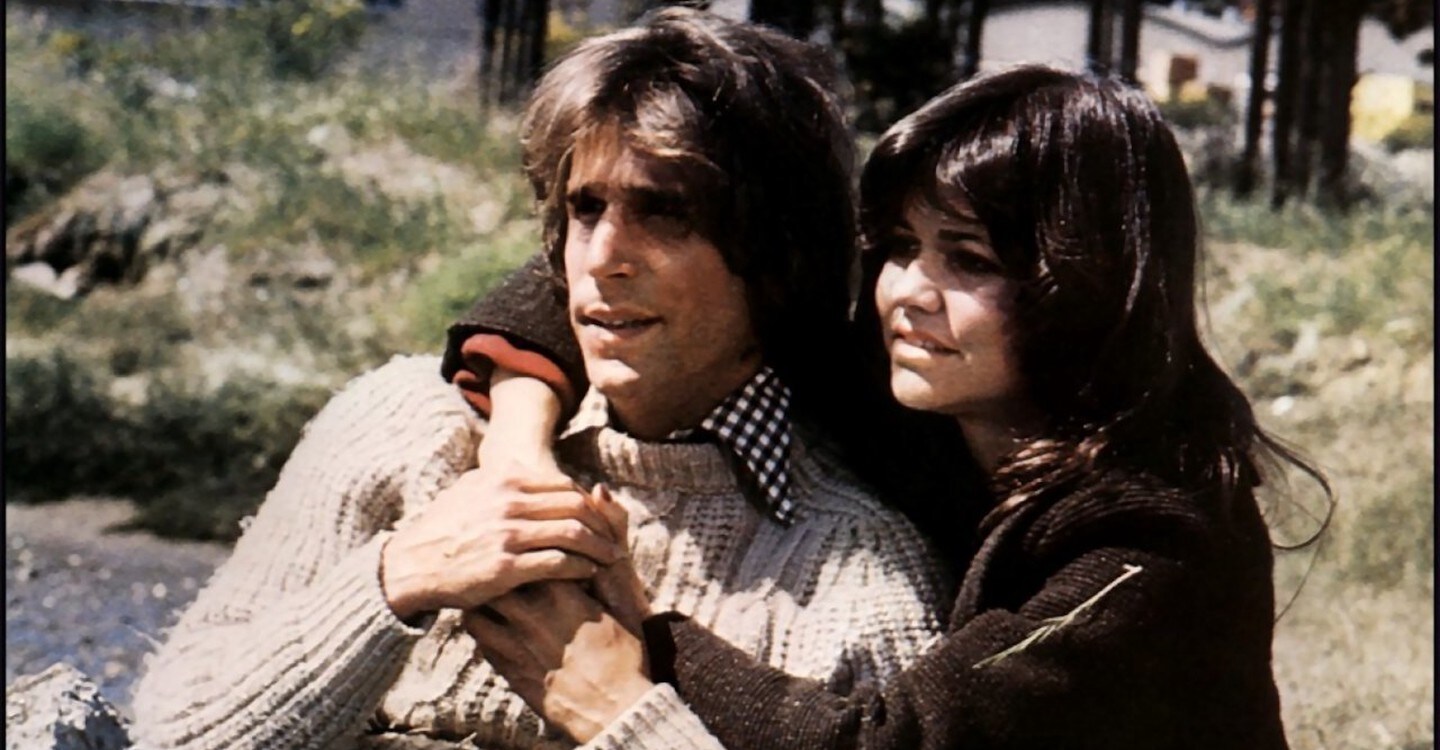 As the father of two teenagers, I’m often blessed with the opportunity to introduce them — unwillingly, mind you — to various pop culture artifacts under the guise of showing them just how much the world can change in a short period of time, and how things that were once insanely popular can seem, in retrospect, more than a little ridiculous. I haven’t shown them Happy Days yet, but I intend to — partly for nostalgia’s sake, as this is a show that was on multiple times a week via syndication and first-run episodes for much of my childhood, but also so I can introduce them to the character of Arthur Fonzarelli, a.k.a. Fonzie or The Fonz, a motorcycle-riding Italian-American street tough who was the most popular character on television and played by Henry Winkler, a 5’6″ New York Jew.

This is the magic of Hollywood, I will tell my children. Look on in wonder. Behold what the camera can do for you. I will tell them how much I adored the Fonz, how impossibly cool he seemed, and how absolutely no one in the world seemed the slightest bit aware of the fact that Winkler was kind of a left-field choice for the role, and one of the more unusual sex symbols of the era. In real life, Winkler is a Yale graduate and probably one of the more thoughtful and soft-spoken guys in any given room — but put him in a leather jacket, and he’s the coolest motherfucker in Milwaukee, a guy who holds godlike sway over ladies and jukeboxes in equal measure.

All of this is to say that in the mid-to-late ’70s, Henry Winkler was a huge star, as well as a guy who had a vested interest in making sure his non-Happy Days roles showcased his range. It’s still difficult today, but back in the days of the 20-odd-episode season, it was virtually impossible for television actors to escape typecasting once they landed a regular role on a hit show — so it makes perfect sense that with his star on the rise and film scripts coming his way, he’d choose a project that allowed him to play a character who was absolutely nothing like Fonzie.

Enter 1977’s Heroes, in which Winkler plays “Jungle” Jack Dunne, a PTSD-afflicted Vietnam vet who escapes from a mental ward in New York City and heads west with dreams of starting a worm farm.

It’s kind of a wacky setup for a story with significant dark undertones, and that’s even before you toss in the will-they-or-won’t-they relationship that develops between Jack and Carol (Sally Field), the uptight young woman he meet-cutes on the bus he boards while fleeing the cops. To the extent that it’s even remembered today, Heroes has a reputation for being a bit of a mess, and it isn’t difficult to understand why: This is a movie at odds with itself. Screenwriter James Carabatsos, a Vietnam vet himself, had some serious things to say about the war and its effects — themes he’d go on to revisit in the scripts for Heartbreak Ridge and Hamburger Hill — but Heroes really soft-pedals all that stuff, waving it to the sides for so much of the story that it becomes difficult to tell who this movie is really even for. This is not to say that Heroes is a painful watch, but we’ll get to that later.

Universal Pictures bought itself a real turducken of a movie here, the type of project that’s difficult to accurately promote without giving away the whole story, and they were also eager to play up the whole “Fonzie makes a film” aspect of the thing, so the ad campaigns for Heroes were all over the place. The tagline, “Finding the one you love…is finding yourself,” has absolutely nothing to do with anything, and the poster shot of Field and Winkler smiling happily into the middle distance sells this as the sort of love story a studio might have hoped to build around Winkler in 1977. To be fair, there are certainly romcom elements here, including a sort of It Happened One Night interlude that swaps out a Wall of Jericho for a very unlikely bar fight, but the picture’s real through line is the sad story of a man desperately trying to come to terms with survivor’s guilt. It’s tough to square that with sexually charged squabbling between near-total strangers, and the fact that Carabatsos even tried probably says a lot about the American viewer’s willingness to engage with the Vietnam War on any level at the time, but that’s almost certainly a thread to pick up in a different type of post.

Here, for our purposes, let’s just say that Henry Winkler was an absolute gem of a Some Guy Cinema actor in the ’70s, and it’s a goddamn shame that Happy Days kept him from making more movies. As evidenced with his portrayal of the Fonz, he’s an actor gifted enough to subsume himself in unlikely characters — and when presented with a role more squarely in his wheelhouse, as he was with Heroes, he’s downright magnetic. I’m not going to argue that he’s perfect here — I think you can feel and see Winkler consciously modulating his performance away from Fonzie’s bandwidth — but there’s a tremendously appealing tenderness to the way he plays Jack, and the love story that blooms between his and Fields’ characters is gratifying and believable despite the series of contrivances it’s founded on.

The film is solidly cast in general, really. Director Jeremy Kagan (who’d later helm the cult classic The Journey of Natty Gann) was blessed with a deck full of aces, including Harrison Ford as one of the war buddies who’s supposedly part of the group that’s starting a worm farm together in northern California. The scenes in which his character appears — belligerently proud of a souped-up car he enters in races, only to freeze up before the starting pistol; spending his nights getting drunk and firing military-grade rifles at the stars — offer several of the movie’s periodic poignant reminders of what it’s really about, in between screwball arguments and wacky set pieces. After awhile, you get the sense that the cast knew what kind of movie they were making, even if the movie disagreed.

Any juggling act has to end eventually, and Heroes tries to manage more than one throughout its runtime. On a strictly narrative level, there’s the story of Jack and the worm farm he keeps telling Carol he’s starting with his buddies, despite mounting evidence to the contrary; on a thematic level, there are the constant collisions between the serious and romantic/comedic elements of the film. They all come crashing into each other in the film’s final moments, when Jack and Carol finally arrive at the home of the fellow vet who’s supposed to be the key to everything — and he genuinely does live up to that advance billing, albeit not in the way Jack’s made him out to be. Without spoiling anything, Heroes sends itself way the hell out on a ledge here, and although it’s easy to respect what Carabatsos and Kagan were trying to do, it’s hard not to fault them for a certain degree of well-meaning insensitivity. Depending on your point of view, you’ll either find this movie’s closing scenes heartwarming or you’ll suck air through your teeth and wince at the utter wrong-headedness of it all.

All in all, Heroes is worth watching for a good number of reasons — it features strong performances from a talented cast, its heart is certainly in the right place, and it’s an interesting example of a mainstream Hollywood attempt to grapple with the aftermath of the Vietnam War before The Deer Hunter, Apocalypse Now, First Blood, or Platoon came along. It’s also a halfway decent romantic comedy, albeit one that exists at the expense of the aforementioned grappling. It isn’t as bad as its Rotten Tomatoes score would suggest, but on the other hand, it’s nowhere near the best work from anyone who was involved in making it. I wouldn’t rush to turn it off if you happen to see it on a nearby screen, but I’m not sure I can actively recommend seeking it out. Let’s call this one two and a half out of five Scheiders.