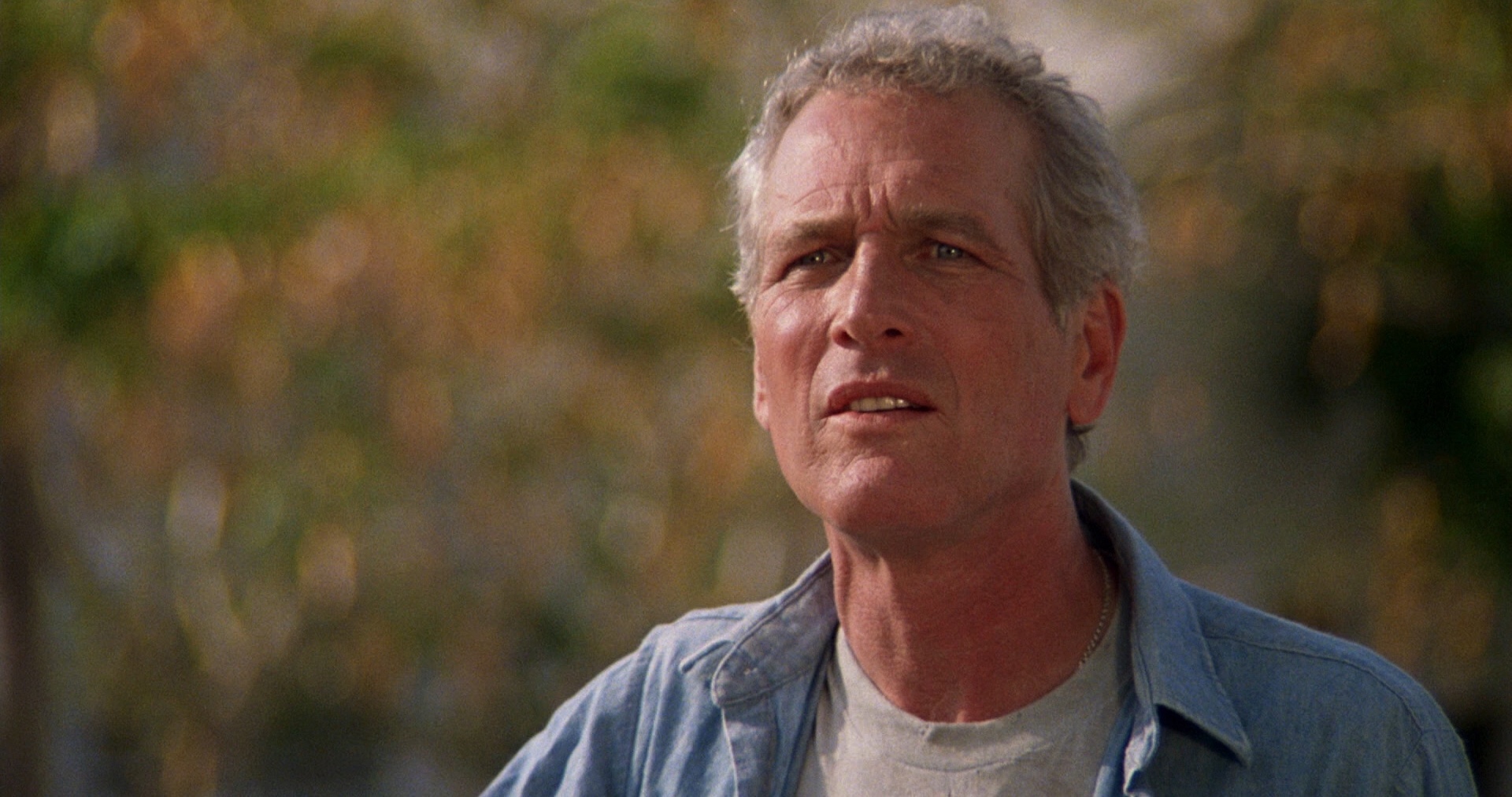 In general these days when writing about pop culture, I come to praise, not to bury. Still, I find that failure is often more interesting to explore than success — trying to figure out what drew a person to pursue a particular project, or digging into the disconnect between what they were trying to achieve and what actually happened, can be really fascinating. Puzzling this stuff out is often more entertaining than the work itself, and can make watching a middling film worthwhile.

At the risk of overstating its shortcomings, I’d say this is definitely the case with Harry & Son.

Full disclosure up front: Paul Newman is my all-time favorite actor, and his fingerprints are all over this film. He directed it, starred in it, co-produced it, and co-wrote it. It was clearly a passion project for him, and it arrived at a time when he was beginning to bounce back from a string of critical and commercial disappointments; after back-to-back Oscar nominations for Absence of Malice and The Verdict, he seemed to have shaken off the doldrums that had plagued much of his work for the better part of a decade, and he used some of the industry capital earned with those films to get this one made. You’d think it’d be safe to assume that the results would be extraordinary.

In terms of its rough outline, Harry & Son is of a piece with a lot of the pictures Newman gravitated toward over the last 20 or so years of his career — it’s a small story in which not a great deal happens, but the relative lack of narrative incident is offset by meaningful interactions between characters who are working through some sort of hurt. Newman seemed particularly interested in stories of generational conflict between fathers and sons, a thread he picks up here for the first time since 1963’s Hud — although the roles have been reversed here, and instead of playing the son, now he’s the father.

For viewers well acquainted with the types of characters Newman tended to play as an older man, Harry Keach will definitely feel familiar. He doesn’t talk much, his sharp wit can serve as the leading edge for acts of terrible cruelty, and he’s perpetually at risk of being estranged from all of his friends and loved ones — and yet he also has an almost childish vulnerability that prevents those people, and in turn the audience, from turning their backs on him completely. If you’ve seen 1994’s Nobody’s Fool — my all-time favorite film — Newman’s portrayal of Sully is essentially a more fully formed version of Harry, only with a better script and director.

In other words, Newman is playing a crank here, which is something he was very good at, and he draws you in to Harry & Son from the opening scenes, which establish that Harry is a crane operator who has a deft touch with a wrecking ball — a skill that’s compromised by blinding headaches that strike with unpredictable irregularity. When one such incident nearly gets one of Harry’s fellow crew members killed, he loses the job that’s defined his identity and quickly starts coming emotionally unmoored.

Harry’s bruised pride and subsequent struggles to hang onto a sense of self-worth are contrasted with the more carefree lifestyle of his college-age son Howard (Robby Benson), who details cars for money and pursues a dream of being a writer when he isn’t surfing. Angry about being unable to work, Harry pressures Howard to get a “real job,” which leads to a series of bizarre interludes scattered throughout the film. An older female client offers Howard a position at her company, which turns out to be an invitation to some deeply strange sex and a job baling cardboard in a warehouse run by a foreman who seems to be one bad afternoon away from a fatal stroke (Morgan Freeman). Another client offers him a lucrative gig repossessing cars, but at his first stop, he’s caught by the car’s owner (Ossie Davis) and ends up quitting and getting that guy a repo job instead. At every turn, Harry gets more belligerent toward his layabout son.

It’s a familiar story arc. The problem with the way it’s presented in Harry & Son is that Howard isn’t really written as the type of kid any parent would be mad at — he seems to make pretty good money detailing cars, for one thing, and even if it isn’t a “real job,” he’s a loving and attentive son who’s shown going far, far out of his way to maintain the household and offer his father emotional support since the death of Harry’s wife and Howard’s mother. Of course, Harry wouldn’t be the first parent to be unreasonably tough on a child, but he isn’t presented as a villain in this story — you’re supposed to be rooting for this guy, even when, for example, he goes out of his way to hurt his daughter in the name of getting a petty dig in at his son-in-law. It’s as if the movie can’t choose between its conflict or its characters, so it just keeps mashing them together again and again in the hopes that something compelling will happen.

It never quite gets there, but there are some interesting moments along the way. Newman was one of the best at playing scenes that could have functioned as one-act plays, and it might be easiest to appreciate Harry & Son as a series of those, especially since it’s loaded up with a surprising amount of quirk. For example, there’s Harry’s contentious/flirtatious relationship with Lilly (Newman’s longtime real-life wife Joanne Woodward), a friend of his wife’s who runs a neighborhood pet store/phrenology emporium and spends much of her screen time trading lines with a bird who only speaks Spanish. There’s Howard’s dalliance with that older woman (Judith Ivey), who has a volcanic fetish for the sound of a camera shutter and ends up being handed off to Harry as a sort of gift from Howard to his old man. These sitcom touches aren’t really played for laughs, which is fine — but the movie doesn’t really do anything else with them, either. It’s all just sort of a jumble of incident.

It’s never quite dull, however. Even spread as thin as he clearly was on this project, Newman is a magnetic screen presence throughout Harry & Son, and you’re drawn to him whenever he’s onscreen (which is thankfully most of the film). If Harry can be hard to like and even harder to understand, the way Newman plays him makes you want to try. And as I’ve already made clear, he surrounded himself with a hell of a cast — aside from Woodward, Freeman, and Davis (the latter of whom does remarkable work with his handful of lines), you’ve also got Wilford Brimley, as Harry’s brother who (quirk alert!) owns a military surplus shop, and Ellen Barkin as Lilly’s daughter Katie, who had a fling with Howard and is now heavily pregnant with a baby of unclear origin. The net effect is that as the movie drifts uncertainly toward its conclusion, it’s easy to become at least peripherally absorbed in these characters’ lives, one one-act play at a time.

The real weak link here, unfortunately, is Benson. Harry & Son presents Howard as a real swell kid, and in his performance, Benson leaned into that with an angelic gusto that veers from puppyishly charming to downright annoying. It’s sometimes difficult to tell whether Howard is supposed to be suffering from some sort of head trauma, and in every one of his scenes with Newman — especially the one in which their characters have what’s meant to be a dramatic confrontation — he’s embarrassingly outmatched. Overall, Benson plays Howard like a young man whose feelings for his father tend toward hero worship, while Newman plays Harry like he’s confused and faintly embarrassed by Howard. I can only imagine that much of this — on both sides — wasn’t exactly acting.

That disconnect ultimately cuts Harry & Son off at the knees; as it heads into its final stretch, the movie’s problems become more and more distracting, until it reaches a conclusion so mawkish that I choose to believe it was written and directed by Benson without Newman’s knowledge or consent. It’s very easy to understand how this film became a little-remembered footnote from a phase of Newman’s career that included some of his most acclaimed work — and unfortunately, it’s also easy to understand why he was so driven to get Harry & Son made: When it arrived in theaters, Newman was only six years past the death of his son Scott, who died of a drug overdose in 1978 at the age of 28. As you might imagine, this haunted Newman, for a variety of reasons, for the rest of his life, and it isn’t difficult to see Harry & Son as an attempt for him to process some of his guilt and pain by acting out a relationship between another father and son.

It’s disappointing that all this didn’t add up to a successful film, but as far as failures go, it’s an interesting, good-hearted one. Not one of Newman’s better films, but one of many Some Guy roles for him, and a decent diversion for a quiet afternoon. I give it two and a half out of five Scheiders.