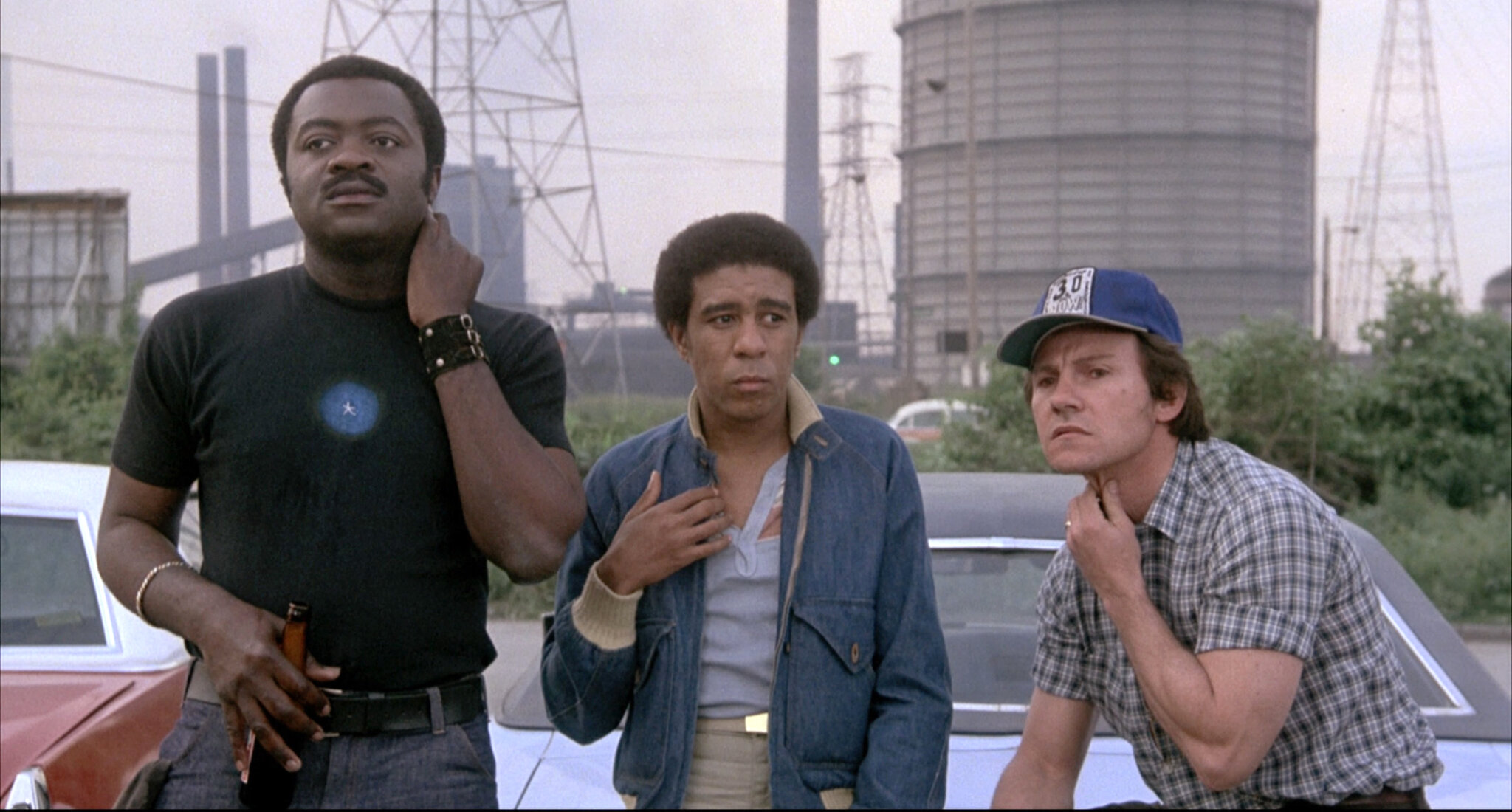 For a movie that’s largely faded from mainstream memory, Blue Collar has an awful lot going for it. It marked the directorial debut of Paul Schrader, for starters — after peeling off a series of showy screenwriting successes that included Taxi Driver, he parlayed his budding clout into a film of his own. True to form for the socially minded Schrader, the project he picked is a pitch-black jeremiad against consumerism, classism, and labor exploitation; although there are certainly many moments when it has the loose gait of a comedy, it’s really a drama, and one that has absolutely no interest in making you feel better about anything as the closing credits roll.

If the only thing Blue Collar had going for it was Schrader (working from a script he’d co-written with his brother Leonard), it’d still be a deeply interesting artifact of its era. But it’s also incredibly well-cast: to tell his story about three Detroit auto workers cracking under unbearable economic stress, he hired Harvey Keitel, Yaphet Kotto, and Richard Pryor. The latter star enabled the studio to play up the film’s comedic elements while promoting it — on one poster sent out to theaters, Pryor’s face is the only one featured (twice) — but he’s really so much more than comic relief here. In fact, out of all the entries in his filmography, Blue Collar might do the best job of distilling the molten rage that flowed through Pryor’s desperate (and desperately funny) brand of humor. He’s got the showiest role by far, but that absolutely isn’t any kind of knock against Keitel or Kotto, both of whom bring soulful, subtly layered performances of their own to the picture. There really isn’t a single weak link in the chain.

The story centers on Zeke (Pryor), Smokey (Kotto), and Jerry (Keitel), all of whom shoulder a variety of financial burdens. Zeke’s in deep shit with the IRS for lying about the number of children he has, Smokey is in hock with a local loan shark, and Jerry’s two jobs aren’t enough to pay for the braces his daughter needs. Life on the line is miserable — the plant’s ball-busting foreman is called Dogshit, a nickname that’s uttered right to his face — and their complaints get them nothing but lip service from their corrupt local union, which is under investigation by the FBI.

Their plight is bleak, but they’re no angels — in fact, they’re rarely entirely sympathetic as characters. At one point, Zeke and Jerry lie to their wives and gleefully sneak over to Smokey’s, where they indulge in a nightlong binge on the drugs and women he’s procured for their pleasure. Bemoaning their lives as they come down the next morning, they hatch a scheme to break into the union office, planning to raid the sloppily guarded safe and use its contents to get themselves out of debt.

They rationalize the theft, in part, by pointing out that they’ll only be stealing back their own money — and although they conveniently ignore the fact that they’ll also be stealing from everyone else in their union, the nature of the crime is a perfect reflection of Schrader’s point of view with Blue Collar: Middle-class workers are so thoroughly fucked by a rigged system that even when they go outside the law to try and get ahead, they can’t avoid ripping themselves off in the bargain. And the con doesn’t stop there: After cutting a deal with a local hood who agrees to supply them with safecracking knowhow in exchange for ten percent of the haul, they make their way into the safe, only to discover it contains no more than $600 in petty cash — along with a ledger keeping track of various large, illegal loans the union has made with its members’ funds.

When their crime is reported as a theft of at least $10,000, they hatch a different scheme, deciding instead to blackmail the union into giving them the reported amount in exchange for the ledger. Far more involved than a simple breaking-and-entering job, this is far beyond the natural capabilities of novice thieves — and predictably, this is where things start to get wobbly, and a lot more dangerous, for Blue Collar‘s main characters. What once seemed like a wacky lark — albeit one underscored with real rage — begins to take a much darker turn.

I’m not here to spoil the rest of Blue Collar‘s plot. I wish I didn’t have to offer as much of an outline as I have, because I feel like this film might be most rewarding if the viewer goes in knowing nothing more than the names of the stars and the type of character they play. Spotted from a distance, this has the familiar outline of a movie about workers trying to stick it to the Man, and it wouldn’t be wholly inaccurate to describe it in those terms — but it’s also much more complex than this type of movie tends to be. Schrader’s Calvinist theology has fueled a filmography devoted to empathetically observing the moral failures of man, and it really does start here. Rather than the simplistic good guys-vs.-bad guys inspirational drama that tends to arise out of this type of story — for example, the Oscar-winning Norma Rae, released just a year later — this is a film without good guys or bad guys. Everyone’s wallowing in the same shit; they’re just not content with their own corner of the pigpen, and they’ll walk over whoever they have to in order to get ahead.

Blue Collar was not a box office hit, and it’s easy to understand why. As I said going in, this is a film that isn’t interested in making the viewer feel better as the end credits roll — its final thesis seems to be that there isn’t any moral compromise too great for the man convinced he’s serving his own interests, and while that might be perfectly in line with the initially invigorating cynicism of ’70s American cinema, it’s also a tough fucking sell for people deciding how to spend their movie money on a Friday night. But as grim as it is, this isn’t necessarily a pessimistic film — a guy like Schrader doesn’t spend his career telling stories about the pale, sweaty underbelly of humanity just for the sheer misery of it. It’s supposed to have a galvanizing effect — to challenge the viewer into taking a critical look not just at his fellow man, but at himself, and call to the better angels of our nature. This is a cautionary tale. The next time you find yourself at odds with someone over a conflict imposed by people who have more power than both of you, will you have the strength to seek amity?

Human history tells us that the answer is “probably not.” But Schrader has never stopped posing the question.

Anyway, Blue Collar is a pretty terrific film — and for our purposes here, it’s just about perfect, since every single character is a Some Guy. Our main characters are ordinary working-class guys, but the people they answer to are getting squeezed too, and Schrader does a fine job of illustrating just how thankless the whole thing can be, whether you’re an auto worker toiling on the line or a foreman, shop steward, union boss, IRS accountant, local hoodlum… you get the idea. No matter how big you get, someone else is bigger, and they’re going to shake you down for their cut. But does that mean it’s every man for himself, or that all of us are in this together? You’ll draw your own conclusions if you watch Blue Collar, but I know what I believe. Four out of five Scheiders.