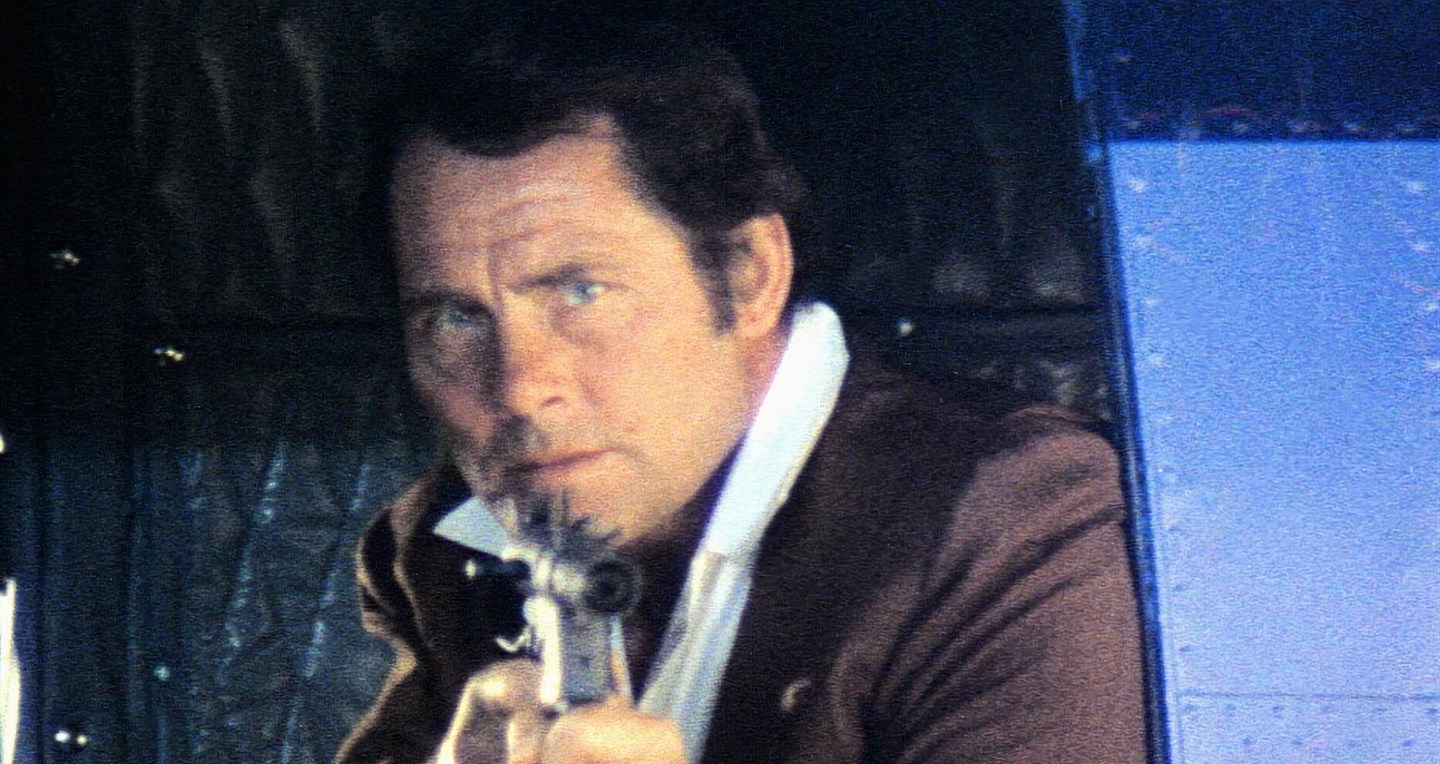 As we’ve seen and will continue to see throughout this series, one of the hallmarks of Some Guy Cinema is a conspiracy plot that our hero has to foil. More often than not, said conspiracy will be something at or near the local level — typically the police commissioner is in bed with some drug or arms dealers, or the mayor is secretly the bad guy behind it all, or maybe there’s some asshole running for governor who moonlights as a pimp. You get the idea. But every so often, we get to see Some Guy laying his life on the line for an altogether greater cause — like, for example, Robert Shaw in 1977’s Black Sunday, about a Mossad agent determined to prevent Palestinian terrorists from sending a bomb-strapped blimp into the crowd at the Super Bowl.

The stakes, honestly, caused me to endure a fair bit of internal hand-wringing over whether Black Sunday is a true Some Guy Cinema entry. The film also picks up at least half a demerit for casting Shaw, whose steely-eyed determination and overall patrician vibe make him an uncomfortable fit for this series. (Also uncomfortable, but beside the point: Robert Shaw’s generally comical attempt to pull off an Israeli accent.) All in all, however, I think you can safely add this movie to your Some Guy queue; it’s got some qualifying components that help mitigate its tilt toward generic action movie fare, along with some stunts that must have looked pretty goddamn sweet back in the day.

As I mentioned previously, Shaw’s performance as Mossad agent Major David Kabakov puts a significant crimp in Black Sunday’s Some Guy Cinema style. As a younger actor, he was one hundred percent dashing; as a more mature star, he exuded the aura of a man who was born with a briefcase in his hand and a natural refusal to tolerate any and all nonsense. He was incapable of acting like a person who’d marinated in regret and impulsive decisions long enough to be a Some Guy, and for maybe half of Black Sunday, I assumed I was watching a different kind of film.

The thing about Kabakov, though, is that by the time we see him in Black Sunday, he’s all used up and he absolutely knows it. Shaw turned 50 the year this movie was released, and he uses that to his advantage here — his character is a respected counterintelligence officer in his country, but he achieved that status after years and years of service that have hollowed him out. He says as much to a colleague (played by fellow non-Israeli Steven Keats) after a raid that goes quasi-pear-shaped, admitting that he’s lost his sense of purpose because he’s able to see both sides of the intractable conflict he’s fighting in. On the other side of that conflict is the other reason Black Sunday is a pretty swell Some Guy movie:

So here’s the plot of Black Sunday in a nutshell: Kabakov is trying to bust up and apprehend the Palestinian terrorist group known as Black September, who existed in real life and were responsible for a number of actual high-profile attacks. Using them as the movie’s villains is just one way Black Sunday went out of its way to make the audience feel like they were watching something that could really happen — from veteran broadcaster Pat Summerall to then-President Jimmy Carter, the film leans heavily on real-life details to juice up the action. Black September’s plot here is to retaliate for American subsidization of Israeli military might be commandeering a Goodyear blimp during the Super Bowl, loading it up with explosives, and using it to kill everyone in the crowd.

Black September’s ace in the hole, so to speak, is Michael Lander (Dern), a decorated military veteran whose career ended after he was captured in Vietnam, held captive for years, and forced to recant on camera the acts of brutality he perpetrated on behalf of the United States. Turns out Lander’s specialty was flying blimps and he has a gig doing it for Goodyear, which makes him an ideal asset for Black September member Dahlia Iyad (Marthe Keller, fresh off her breakout role in Marathon Man a year prior). Lander, bitter and more than a little unbalanced, is eager to get some payback against the country that turned its back on him, although his chief motivation is that he’s got the hots for Dahlia — feelings the film works hard to inspire in the audience by displaying Keller in various states of undress whenever she isn’t busy murdering people.

So on one side, you’ve got a Mossad agent who’s lost his compass. On the other, you’ve got a military veteran who’s lost his belief in his own country. In between, you’ve got decades of real-life bloodshed between the Israeli and Palestinian people — all of which makes for an admittedly awkward blend when you’re using it to fuel a series of awesome action set pieces. There’s a fine line between grounding your big-screen shenanigans in the real world and exploiting actual human misery for profit, and Black Sunday wobbles on that line real hard for a lot of its length. You can sense what the film is genuinely going for in terms of good intentions, but you can also tell it was directed by John Frankenheimer, and the result is a story that pays a certain amount of lip service to the notion that one man’s good guy is another man’s bad guy, war is bad, etc., but still wants to make the audience cheer with the awesome spectacle of it all.

There is, in other words, a certain inescapable queasiness to Black Sunday, but it’s leavened to an extent by Dern and Shaw. The latter actor, as mentioned previously, does a fine job of communicating the existential weariness of his character — he’s still got flinty eyes and a clenched jaw, but Shaw layers in just enough sadness and self-loathing to keep Kabakov from feeling like a caricature. Dern, meanwhile, is absolutely excellent as Lander — one of the film’s true emotional anchors is a sequence in which he shows up for a therapy appointment at the VA, where he’s treated like a number by the receptionist and inadvertently enraged by his well-meaning new counselor (played by William “Mr. Feeny” Daniels). Black Sunday is obviously and heavily placing its bets on Kabakov, but to its credit, it spends a fair bit of its 143-minute runtime helping the audience understand Lander and his deeply human motivations for a series of grotesquely inhumane acts.

I really don’t want to oversell Black Sunday. It’s far from a perfect film, and in its determination to fill in the details and the context of the plot, it can waver between deliberately paced and flat-out logy. Compared to modern action thrillers, it damn near dawdles. On the other hand, that’s part of its sloppy charm — that, and the pains it takes to underscore the lack of an actual winner in almost any war between nations. I think it’s fair to say that Frankenheimer was an action director at heart, which is to say he wasn’t the type of guy to give up an opportunity to show a Goodyear blimp nosediving into a packed Joe Robbie Stadium while Secret Service agents jump on top of Jimmy Carter. But he also tended to pick projects that had a certain amount of real-world relevance, and that’s absolutely reflected in Black Sunday, right down to a somewhat haunting final shot whose silent subtext suggests that there is no life beyond the hunt for a man like Kabakov — even if he’s no longer able to see his reasons for entering it in the first place. I give this one three and a half out of five Scheiders.