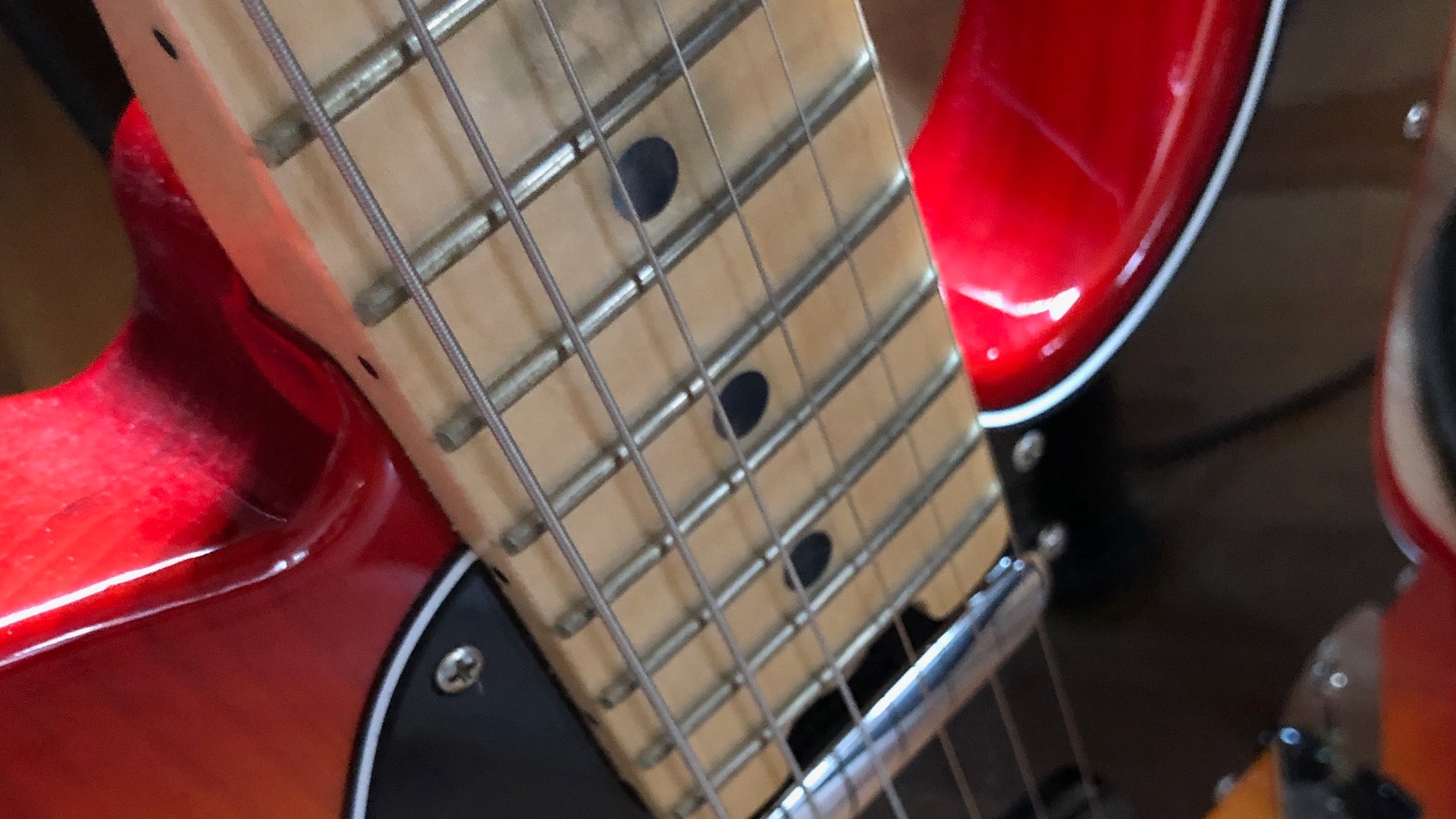 Like a lot of sad, melodramatic kids, I spent large portions of my youth clinging to music as a lifeline. And almost as quickly as the stuff burrowed its way into my being, I wanted to beam it back out: As far back as third or fourth grade, I can remember being fixated on the pipe dream of being a recording artist, of performing on stage, of knowing my art resonated with an audience.

Flush with foolish confidence after being told by a Sunday school teacher that I had a nice voice, I decided I’d be a lead singer — and because I’d slouched my way out of piano lessons after being confronted with a thorough lack of aptitude, I decided I’d play guitar. The only axe in the house was a generic acoustic with such horribly high action that it was unbearable to play, but I figured I’d get there eventually. In the meantime, I dreamed up melodies in my head, wrote reams of lyrics, and envisioned the music videos in my daydreams.

When you’re a kid and everything is in the future or otherwise out of reach, this type of senseless bravado is all it can take to get you known as a songwriter in your circle of friends — or encourage peers to take you seriously enough to start “bands” that really aren’t anything other than shared delusions. In fifth grade, I started a creative partnership with my friend Ben that eventually encompassed everything from trading lyrics to making a deeply embarrassing comic book about a warrior named Marzon and trying to sell copies to classmates.

I wanted to create, is what I’m saying, and it didn’t matter whether I had the tools or the experience or even really any talent. Everything that goes into art on the technical side was beyond my ken — I just had emotions I needed to process and ideas I wanted to share, and I was determined to make it happen.

If I were telling a different kind of story, this is the part where I’d start talking about how, once I finally gained access to the means with which to share all my pent-up creativity, my latent brilliance was unlocked and I helped create songs that truly strike at the heart of the human experience — and if I’m being honest, there were moments when it felt that way. For me, there’s something fundamentally thrilling about the alchemy that happens when musicians work together; I really find it moving, to the point where watching it happen can get me kind of choked up. To be a part of it myself, even without really getting my hands in the music, was a high powerful enough to last through roughly six years of sessions, dozens of demos, and a couple of albums, to say nothing of the financial cost.

The problem, although I didn’t realize it at first, was that I was just playing at stuff. I hadn’t taken the time to lay the foundation. I hadn’t earned it. Vanity projects are fine if you’re brilliant, but as a singer and a songwriter, I was never much more than mediocre, and often far worse. After getting a handful of shows under my belt, I realized I was marking time between cover songs and I was bored with my own material, and after one particularly disastrous set, I vowed to retire from making music until I could really make some on my own — put in the time, learn an instrument, really appreciate what it takes.

Needless to say, starting from scratch has never been my strong suit, and in the moment, I think that vow had more to do with frustration over the inescapable limits of my singing and songwriting abilities than a genuine desire to actually put in the work and hone any kind of craft. More and more often, when I sat down to try and write lyrics or come up with a melody, I felt like I was repeating myself. I’d dealt with writer’s block before, but this felt like a more fundamental malaise; after months of trying to puzzle out a way to find a way back in from a different or deeper angle, I allowed myself to consider the notion that I didn’t need to write songs anymore, and the relief that came with that thought was impossible to ignore. Once I allowed myself to stop thinking of myself as a songwriter, I felt like I’d been freed from a self-induced delusion I’d been laboring under for years.

That moment arrived in the midst of a season of change. In the space of a year, I was laid off from my job, I went through a complete reversal of financial fortune, I got married, I severed several friendships I’d come to view as toxic, and I laid a long-held dream to rest. Multiple components of what I saw as my identity were lost, abandoned, or altered, and I was left to sort through and try to make sense of the remainder.

It was a period not without its painful and existentially scary moments, but in retrospect, it was deeply instructive and ultimately healthy. Professionally, educationally, creatively, personally — in all these areas, I’d gotten by for years by jumping in and cutting what seemed like inconvenient corners. It’s an approach that can pay experiential dividends for a long time, but it’s hard to build a solid foundation for anything, and for me, it led to a crossroads where I was forced to begin again.

If I were telling a different kind of story, this might be the part where I talked about how I rediscovered my songwriting muse, but this is not that story. I’m unpacking all this old stuff here as a way of explaining how easy it can be to develop an entrenched idea of who you are, how quickly life can pull back the veil on the reality behind those ideas, and — most importantly — how rewarding it can be to test your own perceived limitations by doing things and developing skills that once seemed out of your natural reach. I’m a slow learner, and starting from scratch is probably still very rarely my first option, but it’s been nearly two decades since I called it quits on my recording “career,” and the intervening years have repeatedly taught me the virtues — and the pleasures — of patiently assembling an achievement or acquiring a new skill, one step at a time.

Over the last five years or so, my main focus in this area has been on — finally! — learning how to play guitar. The year I turned 40, something finally clicked: I’d been futzing with the ukulele for a bit, but reading an excerpt from Jim Dickinson’s memoir got me turned on to open guitar tunings. From there, I picked up a copy of the New York City Guitar School’s wonderful Guitar for Absolute Beginners, and one day, one lesson, one callus at a time, I went from viewing the instrument as a six-stringed agent of confusion to a source of genuine enjoyment. Again, I’m a slow learner: Learning to play hasn’t made me feel like a musician or an artist, and as a guitarist, I’m always going to be closer to Fred Durst than Steve Lukather. But without getting too terribly life coach-y about it, the process has also taught me a lot about myself.

For me, I think the most useful lesson has been the overall understanding that even at my age, it’s possible to develop a skill I didn’t think I had it in me to acquire. It sounds obvious, but it had a profound impact — I think we all develop a picture of what we’re capable of or good at, and picking up the guitar at 40 helped me realize how much of that picture is framed by presumptions. I believed I didn’t have the patience or the natural ability to play, and although the latter might be true, it’s countered to a significant degree by the reality that to a large extent, playing any instrument is simply showing up and performing simple repetitive tasks. Doing that may never turn you into a virtuoso, but it’ll give you fundamental knowledge, and that was a huge realization for me.

Learning to play also gave me a deeper — and shamefully belated — appreciation for the level of work that goes into writing and performing even the shittiest of songs. I’ve played for years — as of this writing, I’ve played every day for something like 425 days — but I’m not sure I’ve ever played an entire song all the way through without flubbing at least one note or chord. A lot of this is muscle memory, but human effort is sloppy, and the fact that any music exists at all is a kind of miracle. I don’t know if I’d go back and retract any of the negative reviews I’ve published, but it would certainly be interesting to write them for the first time knowing what I know now.

In fact, in some ways, learning how to play music has made it more difficult to write about music. In recent years, I’ve had less time and inclination to sit down at the keyboard and type about art for fun, but I’ve also been in the midst of something like an ongoing crisis with regards to what kind of writer I am — or whether I’m still even a writer at all. I’ve already gone into all this at length in this space, and it doesn’t need to be exhumed again, but I’ve devoted a lot of thought over the last 10 years or so to just what kind of writer I want to be — what I truly want to say, and how I want to say it.

I don’t have the answer to that question yet. But lately, I’ve been feeling like it might be a mistake to keep waiting around while I puzzle it out, and getting the itch to start messing around with words again even if I’ve lost most of the confidence and all of the momentum that I depended on to get me by before. Is it possible, at this late date, to stop playing at stuff and lay another creative foundation? I don’t have any idea, but I’d like to think so, and I’m glad I still have this little space to try and figure it out. If you’re still reading this, I’m glad for you too.