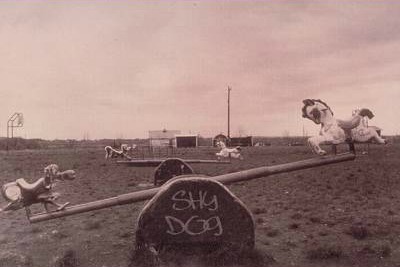 Hey, you’re a shy dog, but I can see
You feel the very same as me
You don’t think like people do
Anyone can see I’m the same way too

When it comes to relationships, I’ve never been much of a stand-up-and-fight kind of guy. When it’s over, it’s over, and it’s time to move on. A few times, though, moving on has been easier said than done — and with one relationship in particular, I took that difficulty as a sign that I should do something different. Instead of letting things fade away silently, I hung around; I dedicated myself to being as open as I could with this woman, and tried to find some way around or through whatever obstacles lay between us.

It wasn’t easy. In fact, it drove me a little crazy, a little at a time, over a period of years. I was lonely, and upset, and always putting myself through unnecessary misery in the name of what I thought was love. I thought I was being brave by refusing to give up on this person, but I was really just ignoring the obvious. In the process, I let a lot of things slip through my fingers — time and opportunities that would never return. I was unfair to myself, and unfair to her. I allowed myself to be used. In fact, I just about insisted on it.

And spinning ’round these memories go
And making sense, well, I just don’t know
Yeah, you could say I’m missing you
Lost and alone, I’m just making do

I didn’t really expect it to work. I just wanted to try instead of accepting the only real choice. Sometimes it really is noble to fight for the ones you love — but you have to know how to choose your battles, and you have to understand the difference between love and sick symbiosis, and I was in way over my head on both counts. I cost myself so much senseless anger and resentment, and when it started to spin out of control, I only leaned into it, grinding myself down until the only thing I could see through the smoke was the worst of both of us.

Standing here, I should understand
Why you left me alone
And this small world just ain’t big enough
And the purest souls, they always go too soon

On one level, I was proud of my self-destructive behavior — it seemed manly, somehow. But the deeper part of me, thankfully, started to get tired after awhile, and once I relaxed my senseless grip on this impossible, toxic fantasy I’d been holding onto, I started to realize what I’d been missing. And I felt something I didn’t expect: a warm sort of relief. I surveyed the wreckage and ruin I’d created and I knew I couldn’t undo any of it — I finally understood I’d been at a crossroads when I decided to fight for that relationship, and I knew I’d made choices that had led my life down a path I couldn’t retreat from.

But I didn’t feel regret. Maybe it was because I’d already devoted so many unproductive emotions to the situation, or maybe it was because I understood, on some level, that the lessons I took from all that destruction were as valuable, in their way, as what I’d lost. All I know is that I wasn’t angry anymore. For the first time in a long time, I felt at peace.

So you go on, ’cause now I know
You belong with the beautiful
And I’ll stay here until golden fades
I’ll see you again on another day

It seems a little strange to me, but on beautiful, unseasonably warm fall days like this one, that’s the feeling that often comes back to me — one of acceptance, of absolution. One of loss, sure, and a little sadness — but a sadness that feels earned, somehow, and more than a little bittersweet. Our stories don’t always have the happy endings we want them to, but we still have to find the strength to let them end. Sometimes that’s harder than it should be.

I got a lot of mileage out of Kurt Neumann’s Shy Dog that summer and fall, particularly the title track: title track

For Kurt, who was stepping out from the BoDeans as a solo artist for the first time, the song was really about a dog — his longtime companion, who (if I’m remembering correctly) was killed by a snake while exploring. I thought it was an incredibly brave choice to be so open about the sadness that a pet’s death can bring, and although I knew he wasn’t talking about romantic loss, I still took comfort from the graceful acceptance in his words, and the dignified resignation in his vocals. When he sighed, “Sometimes things just hurt that way,” it killed me — still does. Because sometimes they do. And that’s okay.